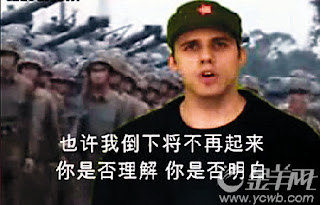 Finally some easy to answer questions.

No, I do not find him offensive and after mailing around some of his videos to people in know in HK they find him funny but not offensive. He is a lot of an attention seeker though but his self taught Mandarin is fairly excellent.

For those of you who don't know who Hong Laowai is (which means red old outsider or red foreigner). He appeared around 2007 as a New Yorker and is a casualty of the Lehmen Brothers collapse.

The song is Bloodstained Glory an easy song in which to sing and if you do it well there is never a dry eye in the house, written in 1987 it was supposed to commemorate the China Vietnam war, a war that was an absolute disaster for China for various reasons*

*Yup China was defeated almost comprehensively by the Vietnamese, the PLA used ancient infantry tactics, refused to use air power and artillery as they wanted a quick raid and at the time did not understand proper combined arms warfare. The Vietnamese wouldn't stand and fight as in the prior wars. The USSR provided direct satellite feeds to the Vietnamese military and they would hit and fade exactly the tactics used today in Afghanistan presently.