added by KaiWen
Note: If you are new here, read this then this, first. You can also contact me, KaiWen, here.

UPDATE: Epic failure on my part. I erroneously posted this on new years last year. Last year was the 99th birthday of the ROC, not the 100th. Also, although the Republic of China was officially founded on New Years Day 1912, but its birthday is celebrated on October 10th, the day of the Wuchang uprising and the beginning of the Xinhai Revolution. Today, October 10th, 2011 marks the 100th anniversary of the founding of the Republic of China. Our friends at NMA can give us a little history lesson.

Today marks a very special day. Because today marks a great anniversary. Today marks the 100th Anniversary of the founding of the Republic of China. 100 years ago today, Sun Yi Xian and Kuomintang Nationalists overthrew the Qing Empire and established the Chinese Republic. In the face of three bloody wars, Japanese Imperialists and Communist threats, the Republic of China has come out strong; as a new democracy and one of the Asian Tigers. Here's to 100 more years! 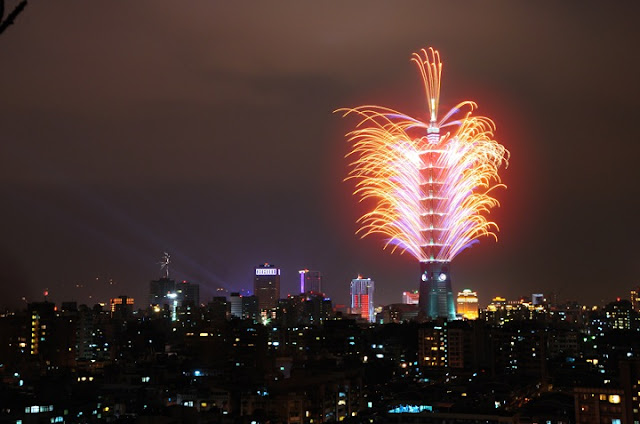 The Hong Kong World Financial Center totally stole the idea of launching fireworks from a building. Above is Taipei 101, the second tallest building in the world (taller than any in Mainland China), and the worlds first skyscraper fireworks display. Enjoy and Happy New Year (until February)!