Right I'm tired of this

This is only my opinion, and since I am not an omnipotent type I may well be wrong.
Yet another Chinese bubble myth pops it's ugly head up. Sure Chinese GDP is faked but then again it is faked in our western economies too.

I mean FFS, GDP in western nations is counted really badly.... so there is a faster computer out there, even if you didn't buy it, it still increases your productivity therefore it gets added to the GDP figures. So you own your home, no I don't mean you have a mortgage but you own it outright. Ah but the government considers this how much rent would you have to pay if you did not own and had to rent. Even though you do not rent.... such silly things like that.

Or how when something gets bloody expensive people substitute it for cheaper things.... I'm not sure my car runs on anything other than petrol tbh and what I can substitute food for either. Watch some of the crash course if you have a couple of hours.

Anyway annoying me is this video doing the rounds:

OMG China has a massive bubble, they have 64 million empty homes. Nobody lives in them electricity and water consumption confirm these are empty cities ghost cities if you will.

OMG those poor factory workers who have to work ten years to afford such apartments! Its all a massive bubble! 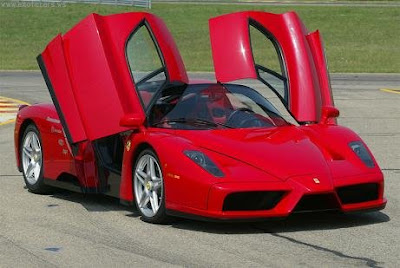 This Ferrari Enzo would take me a couple of life times to earn enough money to own..... except this assumes I want a ferarri enzo... however I don't, perhaps because my piece of junk 1999 sports tourer bike Has the ability destroy a Ferrari Enzo probably maybe or at least have 80-90% of the performance of it.

Let me step away from this for a second..... why did you study hard in school? Why do you toil and work hard? Do you do it for fun (OK my dad is a nutter and works for fun but he is a rare type of person) or do you do it for a reward of some kind. You know a pay cheque at the end of the money for some $$$$$.

In the USA and Europe we have migrant workers. In the USA (although as said I've not actually been there and the TSA are doing nothing to encourage me to visit there. A certain drop zone in the USA is HIGHLY tempting though...... Anyway you get poor people from poorer countries who go work in the USA. Some of them stay and settle, while others work for a few years and take the money home to invest in something build their homes or whatever. The ones that come and go after a few years are playing wage arbitrage. They can go home and the money they earned from a pretty poor wage is effectively tripled when they go home. Poles and Eastern Europeans can do this. So while they are paid £5.92 (not much) they go home and it suddenly becomes £17. Etc.

Well the thing is China is a big country, where 900-1.1bn people are still from rural areas and haven't got a pot to piss in. This is of course changing slowly with time. These people aren't in on the empty apartments bubbles, for a start they can't afford to buy a house. Many of these workers live in company provided accommodation. Hell Foxconn even has an entire city complex to house its employees. Thus they aren't in on the property speculation you don't get NINJAS in China. Which instantly discounts 70% +of the population.

Additionally the workers work at such places because they have a goal, to save some money and go home to use it on something like investing in businesses to build their own homes etc. I mean why else would you put up with really crap conditions at work? If your boss bullied you and gave you constant unhittable targets why wouldn't you just go nuts down tools and simply walk out? I mean labour laws aren't so bad in China that you are held at gunpoint you can leave.

If you couldn't people would flip out like this

Because they do not intend to do this forever. They put up with hardship now and reap the benefit later, i.e. I have money to invest I can have a home without a cripplingly large mortgage! Thus why would the couples living in the slums in the film linked above want to buy such over priced apartments ? Sure it would take them 10 years working in their unpleasant jobs to afford a not so nice apartment. But why would they do this when many of them can simply go back to their home villages and build there instead for a fraction of the price?

Granted not everybody can do this as if your home village is now a Beijing of Shanghai suburb then the price will be uber to do this. But with 900million of more country folks (expected to decrease to 500 million by 2040) a great many can do this. Thus why buy Ferrari when I can buy a similarly performing bike as above, horses for courses of erm course.

So who owns them then?

The wealthy and the elites do.... the ones who own the factories or have big successful companies or government types that take the bribes. The problem with these people is that they have money but they have nowhere to put it for a real rate of return. China has high inflation but interest rates lag the true rate of inflation. You can't take it out of the country easily (Hong Kong is an option) so people pile it into property on the hope that it will appreciate. As they buy in cash and have no loans on it, interest is not really an issue nor is renting it out an issue to cover the mortgage either. It goes pop? 900-1.1bn people shrug their shoulders and get on with life as normal. As they were not in the bubble in the first place. The middle classes and elites get haircuts.

Unlike say the UK where a huge % of the population was in on the property bubble as above NINJAS (no income no job no assets). When it goes pop or when it went pop, these peoples mass defaults mean they hold the government hostage and have imploded the economy.