added by The Chinese guy
Dear TCG
I know that China is a resource hungry country, they fund dictatorships in Africa to exploit its minerals. But recent news made me think. New geological reports show that Afghanistan is sitting on a $1 trillion gold mine, literally. Is it conceivable that China would enter the War in Afghanistan under the facade of fighting terrorism that threatens spilling over into its borders, but with the actual intention of getting to tap into those hills? They did it to Tibet, they did it to Xinjiang.

On a related note, China has also applied for observer status on the Arctic council, despite being nowhere near the Arctic circle. God knows what their intentions are in the Arctic. Who knows how much oil is there.


Firstly I disagree with Xinjiang as Xinjiang has been Chinese in some form or another for close to 1200 years since the Tang Dynasty. The earlier Qin Shihuang dynasty and the Han Dynasties were in a much more limited area. As depicted below: 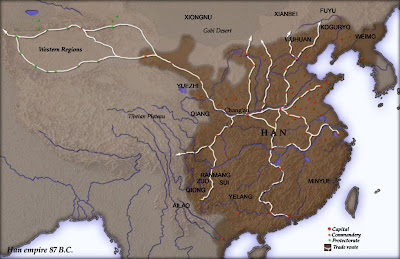 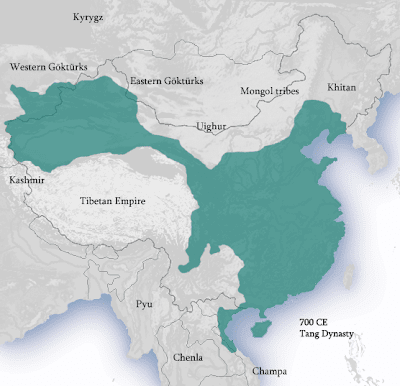 It is widely accepted that Britain was conquered in 1066 and much of our history stems from that date. Also with the USA which was founded On July 4, 1776 as you may well know. Also the Goreyo area as well annexed over time too. So Xinjiang has been China for a very long time though Islamic / Turkic routes cannot of course be ruled out as Islam started around 600AD(ish). If you said Inner Mongolia where they have performed social engineering (i.e. put 2 million Han Chinese there so the local people are simply bred out of existence over the next 20 years) I'd have agreed.

Even Tibet is contentious, true Tibetans have a right to be pissed off when the PLA entered the Tibetan capital Lhasa and killed a great number of them, but there are controversies through time mentioned here. I won't get into a life of Brian, so what have the Roman's ever done for us type debate here.

This is unknown, however on your main point I think China's resource hunger depends on the apetite of the US and European consumer, since the US and Europe are pretty much broke, the resources needed are consequently less. The current growth in China is merely economic stimulus spending its savings which cannot last forever and thus if demand falls from it's client's then demand for materials will fall too. Even if it was business as usual China is getting Japanned and Korea'd Japan in the 1960s and Korea in the 1980s. In the 1960s Honda was considered to be crap, same thing with Hyundai in the 1980s. Today there is widespread dislike of Chinese goods as often they are poor quality, they stuff from western/Japanese supervised factories is good but everything else they play price advantage and use inferior metal etc. Chinese motorbikes should be avoided for this very reason they are life threateningly dangerous. My commie dad doesn't even buy made in China anymore after the tin opener incident where he bought a 40p (about 50 cents) tin opener and it broke, he bought another and it broke again until he had 5 broken openers. He finally swung round my place and took my German survivalist tin opener.

My thoughts on entering the war on terror are:

China for starters has a defensive force, they have little ability to project power the American way i.e. air craft carriers (though air craft carriers may be going the way of the battleship as described here here ) and quite frankly in war they are pretty poor. 1979 for example they sent a huge army to teach the Vietnamese a lesson, and lost almost ALL of their tanks sent did not use proper combined arms warfare and lost 20-40,000 soldiers too. Quite recently the Chinese navy was sent to deal with pirates off Somalia and it was questioned if they would be effective as they have had no real combat experience for decades the last war they fought was 1979. While UK / USA forces have been fighting some pretty serious wars for the best part of the last 20 years.

I think if China wants the resources they won't bother to put up a thin facade about it and will merely make a deal with the controlling people there and send a labour task force to do the mining jobs . Much like they did with Robert Mugabe they know he is a tit but loan him money anyway and prop up his regime. We know they are asshats, they know they are asshats and therefore we aren't surprised when they act like asshats. Or they may just continue to do what they have been doing in central Asia i.e. send work gangs to do things for free for various governments to curry favor from them. The tunnel of doom for example was built by Iran and finished around 2006, Iran messed it up big time, and who was there to fix it? China of course to curry favor from the Tajikistan government.

On the Arctic thing:

I think the Arctic thing is a non issue. South Korea and Japan have expressed interests in them, and it would be foolish not to, the Arctic northern route can shave several 1000km off a cargo ship route to both the continental US eastern seaboard and also to Europe. Lower costs of transport = bigger profits and potential income. Also IF the ice melts that's an IF, they may find oil underneath and who doesn't want that?

One thing which is strangling China currently is the 1920 Jones act whereby things shipped to the USA have to be via US registered ships. This is why Obama is refusing Shell Dutch Oil's specialised ships which can stop the oil leak just like that.