added by The Chinese guy
Dear TCG
What is up with the three Gorges Dam in China? I read there were cracks in the concrete and it's a mega deaster waiting to happen 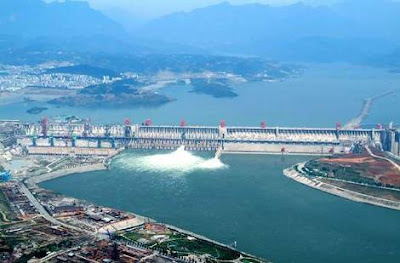 The 3 Gorges Dam is a disaster, you know its bad when the CCP who have a habit of covering things up like mine explosions and faking rescues etc are saying its bad. If it breaks a whole load of people will die. The CCP doesn't care about that though as humans in China are cheap and expendable. Granted it is one hell of an engineering project and I find big engineering projects to have a wow factor in them. Brunel for example is one of my heroes in a geeky sort of way.

The CCP say things like Grim and ecological catastrophe. TCG's dad told him he was a dumb shit in the 1990s as the CCP would obviously look at all the ecological issues about the dam before building it. TCG's dad ate humble pie more than once.

Things said about the dam are erm damning?

"Unforseen disruption of the migration routes for fish and changing the ecology of the fish spawning sites in the Yangtze River."

"Contains a high level of ammonia nitrogen and other pollutants."

"Water quality in the Three Gorges reservoir area is bad and getting worse."

"Rampant geological hazards threaten the reservoir area. the surrounding hills and mountains are collapsing into the reservoir on an incredibly frequent basis."

The problem is the CCP is actually actively admitting such problems and not covering it up like it normally does to save face, as I have mentioned many times before. This probably means the dam is EVEN worse than they will admit to in reality. You know like Gordon Brown saying the UK economy was tickety boo and fine the bastards are even trying to re-write history *UK political bastards not the CCP.


They messed it up badly!