added by The Chinese guy
And TVB wonders why the hell people are pirating their TV channels overseas instead of paying £40 a month for it. As per usual money and influence are the biggest factors in HK society whatever the hell happened to meritocracy or sheer shallowness? Remember Miss HK is a beauty pagent therefore the stuff you see on Miss World where they have to care about the environment and stuff does NOT apply!.
I sometimes watch it (TVB) on my laptop to one side. Not that I watch TVB too often since the news is 24 hours out of date and they only care about share prices and nowt else. I mean the other day a guy was stabbed in TST. The news gave it about 20 seconds.... heh those expats are all flocking over to Kowloon side these days since the shit hole LKF is closed for a month. (TCG famously hates LKF in HK)

Quite normally TCG would bang every miss HK all the way back to 1985 1988 like a barn door in a gale.... scrub 1993 though. But seriously there does look like there is something wrong with Toby Chan.... actually maybe stick in 1987 as well.

Because as my old buddy once said.
"When you're poking the fire place, you ain't looking at the mantel piece" 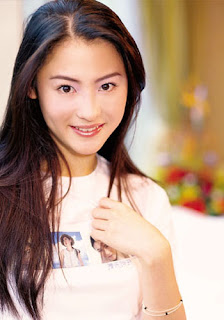 Source
What TCG is a shallower than a puddle? Yeah and so if Cecilia Cheung presented herself on a plate... no wait this doesn't work, as Cecilia Cheung has a massive bush which would make it look like Osama Bin Laden was going down on you. (actually Cecilia doesn't appear to be as nice as she used to be) or if you went down on her you wouldn't need to floss your teeth.

I couldn't put my finger on it.

Then I figured it out, a plastic Cherrie Blair smile. Look at the picture. 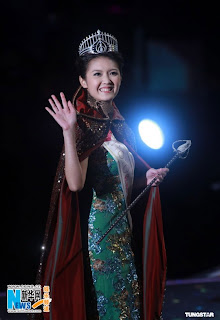 Her smile is terrifically forced and un-natural. Much like (sober) men can spot cross dressers instantly with uber height, shoulder to hip ratio and big hands. (Though Thailand can be tricky TCG's accountant went to Thailand once.... hold on an accountant has an accountant? Yeah.....) People can spot fake smiles pretty easily.

In the UK we absolutely hate Tony Blair,( ex UK Prime minister) he is a murdering lying cunt... the thing is we always go easy on him because he is in purgatory. I mean FFS he is slipping Cherrie Blair one every now and again.

Cherrie Blair is probably in room101 of most sane men. The CIA should use her as an interrogator..... because I don't want my readers to be permanently scarred I shall omit what she could do to get you to confess.

For those of you who don't know who Cherrie Blair happens to be, Cherrie Blair is or was the 2nd
most hated person in the UK. A newspaper (I forget which) commissioned a study about most hated people in the UK who would you deport.

#1 was Abu Hamza, The sun calls him captain hook, he is currently in Belmarsh Prison and the UK government hopes we'll forget who he is.

#2 was Cherrie Blair, because she is a money grabbing witch

邵逸夫! What look at what has happened to TVB!


Where the hell was I oh yeah, people have complained it was a fix! all over the interwebs.