When the Chinese discovered America

You may have learned in elementary school that Christopher Columbus discovered America.

In 499 AD, a Buddhist missionary by the name of Hui Shen sought the land of Fusang. In Chinese mythology, Fusang is a divine tree on the eastern horizon where the sun rises. At this tree is supposedly the elixir of life.

Hui wanted to bring new converts into Buddhism in this land, so he sailed off on a journey east to find it. He sailed over 20,000 li before reaching land. Li is an imperial Chinese form of measurement equal to about 415 metres. Therefore, 20,000 li is equal to approximately 8,316 km. The distance between China and America is more or less 8,600 km, depending where he left and how on course he was. This would plant Hui in the pacific northwest of the modern US. His descriptions of the land were recorded in the Book of Liang, and only provides more evidence that were he landed was indeed America:

"On that land, there are many Fusang plants (perhaps red mulberry, native to North America) that produce oval-shaped leaves similar to paulownia and edible purplish-red fruits like pears. The place was rich in copper and traces of gold and silver but no iron. The native tribes in Fusang were civilized, living in well-organized communities. They produced paper from the bark of the Fusang plants for writing and produced cloth from the fibers of the bark, which they used for robes or wadding. Their houses or cabins were constructed with red mulberry wood. The fruits and young shoots of the plants were one of their food sources. They raised deer for meat and milk, just as the Chinese raised cattle at home, and produced cheese with deer milk. They traveled on horseback and transported their goods with carts or sledges pulled by horses, buffalo, or deer."

He describes the government of the lands peoples:

"An emperor, or a main chief, with the help of several officials, governed the country. The majority of people were law-abiding citizens. The country had no army or military defense but two jails, one in north and the other in south of the country. Those who had committed serious crimes were sent to the north and they stayed there for their entire lives. These inmates, however, could get married. If they got married and produced children, their sons became slaves and daughters remained as maids"

"The marriage arrangement was relatively simple. If a boy wanted to marry a girl, he had to build a cabin next to the home of the girl and stay there for a year. If the girl liked him they would get married; otherwise he would be asked to go away…when a person died in the community his body would be cremated. The mourning period varied from seven days for the death of a parent to five days for a grandparent and three days for a brother or sister. During their mourning period they were not supposed to consume food, only water. They had no religion."

These descriptions seem to accurately portray Native American’s and the geography of North America. The story does have flaws though. Hui describes them as traveling on horseback, despite the fact horses are not native to the America’s and were not brought over until the European’s arrived. Also, it seems far fetched that one man could survive a sea voyage that long and far. Still, this is far more believable than other Chinese exploration theories.

According to the book, 1421: The Year China Discovered the World by Gavin Menzies, Chinese explorer Zheng He discovered America on one of his famous voyages. He also claims Zheng He found Australia, New Zealand, Antarctica and the Northeast Passage, but most records of these voyages were lost. Menzies wrote a second book, 1434: The Year a Magnificent Chinese Fleet Sailed to Italy and Ignited the Renaissance claiming Chinese influences started the renaissance. 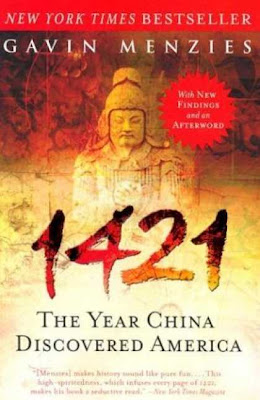 Menzies bases these theories mostly on an 18th century map that is thought to be a copy of an earlier map from 1418. This map clearly shows the America’s and is labeled as such. 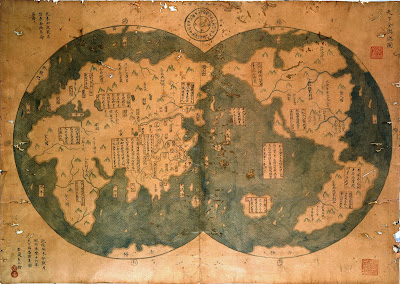 If the Chinese did discover America, weather it be Zheng He or Hui Shen, the world today may be a different place if they decided to stay.