Why do Chinese people give each other red packets at new years? , When is the last day you can give them and who has to give them and why? How much has to be in them? My local Chinese take away gives them to children now and again. 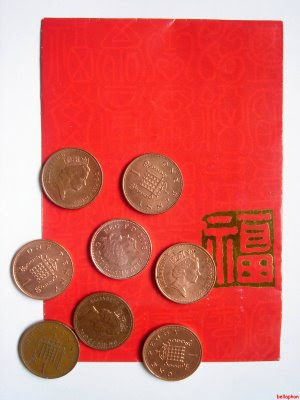 The custom of giving red packets is an old Chinese tradition, and in the Chinese Guy's experience it is plainly extortion from children to elders, its supposed to be giving them good luck and to buy something they enjoy and thus saving on you having to trawl through shops and buy stuff for them. Instead they go out and buy stuff for themselves which is efficient right since you may buy them I dunno last year's Ipod or something equally as uncool.

“Kung Hey Fat Choy”, meaning “Congratulations and Be Prosperous”, is something that people say to each other in Cantonese during the Chinese New Year.

Some children and even some adults, especially evil co-workers will playfully follow that with “Lai See Dow Loi”, meaning, “Give me red packet money!” Which as you may notice is rather impolite as it is a demand.

How much money you have to put them depends on how close they are in your family how wealthy YOU yourself are and also how important face is to you. In Chinese culture face is INCREDIBLY important. This might be something to do with what the Korean says in some of his posts. In that China has been an agricultural society for 1000s of years and thus were usually centred around small villages were everybody knew each other. From the dawn of time you needed to have the respect and earn the keep of your village or perish. This stuck with Chinese people through their modern lives as society and technology may change but ingrained value systems take longer. This oddly cuts two ways in asking for them is seen as cheap ass, while giving Lee see with pennies in them is also seen as cheap ass too, and thus a balance is struck that people generally do not ask (but do expect) and give out modest amounts of money $20 $50 is common in HK (about £1.50 and £3.80) as they will typically buy a nice snack.

If you look back into history in the 1954 great leap forward famine saving face contributed greatly to this. In that peasants were encouraged to exaggerate their harvests to save face, they were even encouraged to destroy their crops tearing them up from productive fields to replant them into show fields, so that when Mao came along to have a look it looked good, Mao then went off home happy that production was so great. Unfortunately the crops died and the villages starved badly. This was exacerbated by the fact that Stalin (who put Mao in power) pissed off Mao in 1951 after refusing to give him Mig Support over all of Korea that would have won the Korean War in favour of the North. And the USSR asked for its $400,000 back (a fortune in 1950) Mao thought the harvests are bumper and robbed the already starving peasants. Hence face is important. Therefore sticking a penny in them would be considered a grievous loss of face. Which is why I call it extortion.

But general guidelines are this:

You may want to revise up or down depending on your wealth!, remember Hong Kong has no minimum wage laws, and the wages at the bottom can be very very low low as $9 an hour if you work it out on an hourly basis so don't be TOO harsh if somebody gives you a small amount.

The other tactic is just to stay in for the duration! , in that although traditionally it is something to be done i.e. go visit family and friends there is no hard and fast rule about this. In that nothing says you cannot be a hermit, if you manage to dodge your entire family for 15 days then there is no need to give them out. This is harder than it sounds as HK is a small place.

However here is the good news, in that if you aren’t married there is absolutely NO need to give out red packets, none at all. The reason for this is that marriage is seen as an act of maturity and thus only mature adults should be giving this out. This applies even if you are divorced or widowed in that you have hit that yardstick and thus are doomed forever to have to give them out.

The last day to give them out is the 15th day after new years, which is the 28th in 2010, and it is not really kosher to be giving them out other than for say birthdays and such like. I do not give them out because I am both broke and unmarried.

I would note that even if you are not married, it is seen as semi acceptable to give Lee See to people if they are broke as it is seen as a more acceptable means of charity rather than outright giving to people. However since The Chinese Guy's friends are mostly non Chinese and or are broke themselves this is pointless.

As a side note there is a variation of this, called Hell Lai See, in that you stuff hell money into lai see, which is very very bad, to make it even worse, you can singe the corners of the money.

Note the big demoninations, they obviously have a hyperinflation problem in hell you know. This money is intended to be burnt which then appears in the hands of your dead relatives, if you stuff a lai see full of these things with singed corners it is like wishing cancer on somebody. In Feb 2009 somebody sent 2000 of these things to Wong Tai Seen police station and scared the hell out of supersticious chinese folk. It is the direct opposite of normal Lai see and it is to give them bad fortune, it is incredibly rare to be given one as the giver is often seen as deserving of some bad luck too so far I have never ever been given one even though with my non immediate family I am mostly enemies with.