added by The Chinese guy
Much as I hate the word kung Fu (as it means result of ones hard work) and martial arts is more wushu than kung fu.....

In the UK the Shitty TVB Chinese channel wants YOU yes you, even Laowai non Chinese readers in the UK to become the next Kung Fu star for TVB. All you have to do is present a 30 second clip of your signature 'move' and be a UK/HK/Chinese citizen of some sort.

The application form is here
1 comments 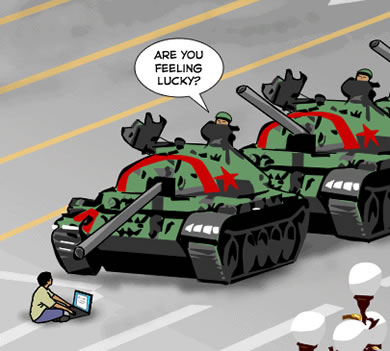 The city of Chongqing is trying to establish uncensored internet access for foreigners and foreign companies, hoping to a center for the IT industry in China. They might want to be careful about opening up their internet, as this slashdot user sums up perfectly:


Be careful offering a little freedom. In former Eastern Germany, their communist regime provided retail stores only for foreigners (or specially privileged East Germans with western money). This made people there very resentful of their government ... and eventually, they got rid of it.

Although Chinese citizens won't be allowed to use the free internet, it make them feel more jealous about   having their internet censored when westerners are using it in the middle of one of their major cities.
1 comments

added by KaiWen
A Chinese man has built his own version of an iPad. Really, its a tablet PC he built from scratch! It can run any OS and is more powerful than the iPad. Best of all, it only cost him $300. He even stylized it with Apple stickers and everything.

Why are there no prminent Chinese MMA or UFC fighters? Why aren't there some Chinese kung fu masters competing? They might even win!

This is my theory and I could be wrong, but it boils down to several things:

One Chinese men are by and large smaller than caucasian and black men, sure we get people like Yao Ming who is massive and Mongolians who can be massive. But these are the exceptions and not the rule.

Apparently I'm a fairly tall Chinese person who is overweight..... I weigh 10 stone, I have to wear weight to skydive and a fast fall suit because I fall so slowly. My English native peers are about 4-5 stone heavier than me and much taller than me.

Take for instance Bruce Lee, he is a pretty small bloke compared to western natives. And he was half German. Or Bolo Yeung, Mr HK a massive massive body builder when stood next to Bruce Lee in Enter the Dragon. But not that big compared to westerners who primarily make up MMA, UFC.

I mean would you fight against a bloke who had 100 pounds on you in pure muscle?

Secondly, a great deal of Chinese martial arts emphasise defence by parrying, blocking and avoidance. I mean look at any wire work Jet Li movie. Yes it is a movie, but it shows him avoiding, blocking and parrying. Compare this to fist fights in Western movies. They pretty much stand there and knock the hell out of each other. Which was lampshaded by Tom Cruise in the film Far and Away. It sort of makes sense, i.e. it is better NOT to be hit than to be hit and to take less damage. I mean would you rather be punched in the face or not? Southern Martial arts based around Wing Chun for instance all emphasise superior blocking and parrying techniques.

But then it sort of like a Samurai sword duel first blow is almost always lethal and is the winner.

Compare to boxers who can pummel each other repeatedly and get used to the pummelling. Ali fighting Foreman took a massive beating for ages and ages. Joe Frazier did the same to Ali. Or Muay Thai Kick boxing, the proper proper art of eight limbs Muay Thai (though even the westernised softened up version seems pretty brutal to me). They pound each other like no tomorrow, they brutalise and train themselves and they get used to it.


Granted those people can probably snap my neck in a pinch


Fourthly Martial arts is dying out, the old grandmasters are dying out and people simply don't have the time to practice their skills and hone them. There is little incentive if you are a trainer in China, as very few people get into the training program to be an instructor and when they do become instructors the wages are LESS than working in factories. Thus while there may well be a lot of theory and lots of in action a lot of people simply don't bother. I mean you gonna fight hand to hand against this? 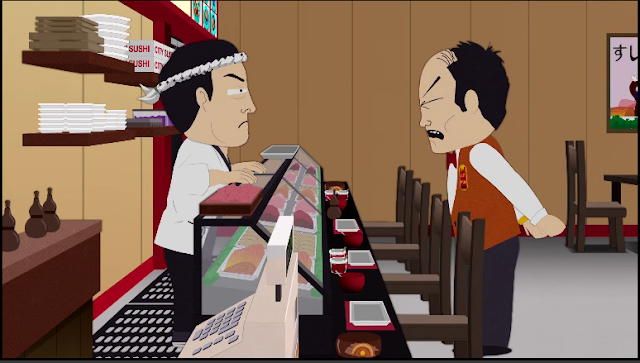 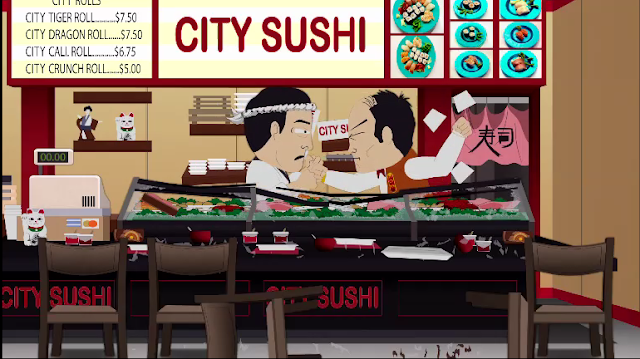 I recently saw an episode of South Park in which the Chinese guy who owns City Wok is forced to contend with a new sushi place that moves in next door. The whole thing turns into a giant episode spanning fight between them, while most of South Park thinks that China and Japan are the same. Its quite hilarious.

Embedding is not allowed so heres a link. I think its viewable in the US only. 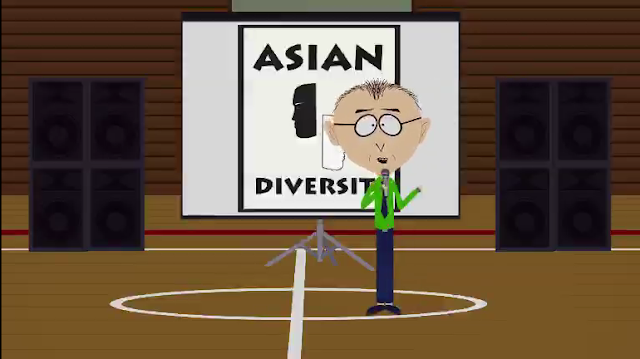 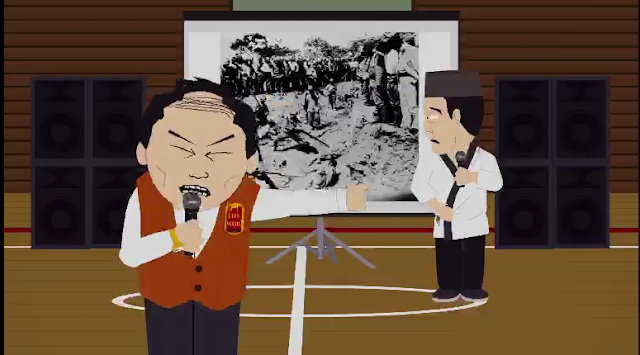 added by KaiWen
American aren't the only ones.

How do you kill a Chinese vampire.


It depends do you mean a Chinese person bitten by a vampire or a Chinese Jiang shi type vampire.

If it is a Chinese person bitten by a vampire, then the usual things apply, stake in the heart, beheading, garlic, true faith, tainted blood. Holy Water and sunlight..... though Chinese people are naturally adverse to sunlight anyway. Since tanning is bad m'kay (people think you are a low class farmer or something). Fire is also good as are Applied Phlebotinum weapons like UV bullets as seen in underworld.

If it is a Chinese Jiang shi type vampire then you have all sorts of problems. As Jiang shi are nearly indestructible. Jiang shi are less vampires and more akin to zombies from Quake, you can shoot them but they keep getting up, much like the terminator

Depending on which movie you see them in they are invulnerable to many things western vampires get killed by:

However you can stun Jiang shi or 'hurt' them to make them go away for a bit. Note stun and not kill.

Stunning is often via a yellow bit of paper on their forehead. Which contains a spell of some kind written in blood. This only freezes them to the spot though. They are very much alive you remove that yellow bit of paper and it'll tear your head off and spit down your neck. In fact if you should encounter such a Jiang shi and happen to find your head detached from your body and a copious amount of spit which does not belong to you in your neck then the thing I told you did not work. Ok so I made that up since they don't spit at you.

I will be happy to offer a refund on bad advice which gets you killed. Heh.

In various movies various things hurts Jiang shi that makes them retreat recover for a day or two and come back even stronger. Does anybody remember the Nemesis from Resident Evil 3? When you killed it with one weapon it would take double the amount of damage from the same weapon which put you in a whole world of shit.

As said it varies from movie to movie.

Blood of various types will stun Jianshi, Chicken blood which has been blessed and the blood of a black dog works. And in Typical teenage horror movism. Peeing on them if you are a virgin will work like Holy Water against said Jianshi. Women probably need not apply.

Large caliber guns will push them backwards a bit like house of the dead:

But you didn't ask that you asked how to kill them.

Or the much more dangerous method is the vampires kiss. In some mythology Jiang shi exist because it draws one last breath in its body it cannot rest. Therefore you have to kiss the damned thing and suck out this last breath. Which will make the Jiang shi instantly deanimate. This is akin to kissing a pissed Grizzly bear which can tear you limb from limb. Except the Grizzly bear is indestructible doesn't feel pain. Kinda like the speech from the Terminator:

"It doesn't feel pity, or remorse, or fear. And it absolutely will not stop, ever, until you are dead."

Good luck with that.

As a note if you attempt to try the vampires kiss, or rather the vampires suck Jiang shi are worse in that they too turn you into Jiang shi if they bite you as well.


Alternatively prevention is the best cure...

Do not piss off dying relatives and leave things unresolved, i.e. give absolution to the dying.

Unfortunately TCG did leave something seriously unresolved with a buried relative recently which is why I keep a bedside flame thrower when I am in Asia (it is actually a chemical weed whacker which I tried with petrol and set myself alight but still works as a flamer).

Unfortunately I am not kidding either..... as my mum has seen a zombie. Her uncle died suddenly and the body 'moved' when it was left alone during the wake. The body was found to have moved upstairs and had opened up a secret cubby hole with the life savings of the family in a box it was clasping. And these stories seem a bit too common to be all lies.
5 comments