I cook quite alot [sic] for my wife as she loves stir fry, and I find a wok good for cooking these things. The big arse problem is that it always turns to rust real quick, what is wrong with my wok?. 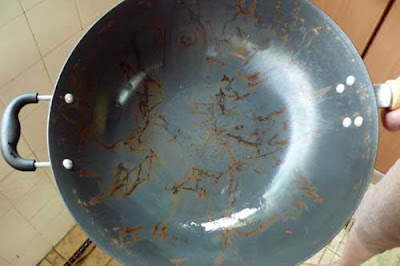 This is a common complaint I hear when I worked in catering, on come on almost ALL chinese people have worked in catering at some point its just the way it is. Anyway, the issue is that you are not seasoning your wok and keeping it oiled. Woks are made from mild steel, stainless is too brittle for when chefs toss the food or clang the wok to clear it of food debris after cooking something. Or when chefs frequently lose their temper (it happens everywhere just look at Gordon Ramsey).

Stainless will shatter and thus we use mild steel woks. Mild Steel rusts like a bugger, with heat and moisture the process of rusting is acclerated as these act as a catalyst . Thus your shiny new wok from the shop turns into a bucket of rust before your eyes. Also as a side Stainless steel oddly enough things stick to stainless steel easier than mild steel thus needing more oil, more oil = more fat and more costs.

If you ever go to a take away place right at before they close you will probably piss the chef off immensely as he will have seasoned his woks meaning he has to do it all over again. You will see bright yellow flame reflections on the walls if the kitchen is nearby.

Essentially they do two things, they keep the wok oiled ALWAYS which means that once you wash it with detergent which carries away the oil the surface is exposed to the elements. To prevent this after washing scrubbing with detergent with a steel scouring pad we heat them up, so they go all blue let them cool a little then put some oil and pan it around so that the inside is covered with a thin layer of oil.

Some people will suggest having a small amount of water in the wok as you heat it up until it cooks off into dancing beads of water and thus cooks off, I don't like to do this as it takes longer and I am incredibly impatient. Also it costs more gas as well as the fact that the water has been known to vaporise into steam burning your face off.

An alternative method is to use some kitchen towel soaked in oil and rub it in but because the wok is hot you may burn yourself.

The back of the wok should be covered in a thin layer of carbon which seals the back of the wok too. Hence it is not exposed to the air from either side and therefore it should not rust if you do it properly. You then leave it somewhere until the next use.

There is another technique that says stick the wok in the oven, which takes ages, is dangerous costs lots of gas or electricity and requires a big oven. While my hob technique is fast and works.

Somebody might ask why not use teflon woks? The problem is teflon pans are cooler than steel woks. With steel woks I have seen oil spontanously combust and burn somebody's face off while a teflon pan I can keep on the hob for hours and the oil never bursts into flames. Also that teflon even the modern kitchen implement resistent type is no match for the cooking and the teflon will peel off and go into the food which as you may imagine would be bad.


The Chinese Guy accepts NO liability for the advice given above and if you set yourself on fire its your own fault.