I am a Korean, and I guess I'm a rather nationalistic one at that, although not too crazy (in my opinion).

So, of course, I have been following the debate about the ancient Asian kingdom of Goguryeo - whether it's Korean or Chinese. I feel like there is much more evidence supporting the Korean side than the Chinese side, but how do you feel about the issue?

I'll tell you a silly story, in that in S Korea the sign for hotel and Jinjilbang are the same or rather when I arrived in Sokcho I found a hotel with this sign, a bowl with 3 flames. When I arrived outside Busan fairly late on my bike trip, and couldn't be bothered to find a river or a beach to camp on I found a huge building with a similar sign to that below. 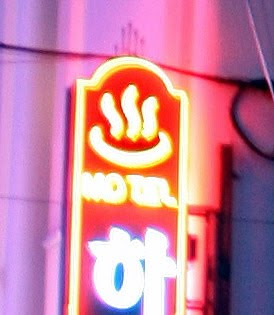 I thought hmm this is a weird hotel and found myself in the company of an incredibly large number naked Korean men. Kyopo? Asked one of the blokes next to me, erm yeah.

Anyway I digress, the controversy surrounding this is the North Eastern Project in that sometime between 1990 and 2004 the PRC government sponsored some research about the North East region north of modern day North Korea. It came to some conclusions that Goguryeo wasn't an independent autonomous state.

Rather it was part of greater China and that China is and was always a multi ethnic society, most people see China as full of Chinese, it is but you can subdivide them into minorities that are still counted as Chinese here there are probably more. In ancient times there wasn't even much disambiguation like we do today. This in addition to the fact that people did and could blend into different minorities quite easily. For example Qin Shi Huang the first emperor of unified China conquered the Han and 2250 years later in 2010 China is full of Han people.

The oddity was with the PRC's change on history was that in previous times pre 1990 it had maintained a similar view of yup Goguryeo did belong to the Koreans, but the view of Koreans is that post 1990 they began to re-write history. Japan did this too in 2005 (remember the key to re-writing history is to make sure nobody can contradict it!).

Koreans like yourself says it used to belong to you.

Which is the source of all this friction, and some people thought it was a threat, even though it was a hotly debated research paper which even some Chinese scholars did not agree with. Motivations for this are probably the noises that North and South Korea are going to be reunited

If North and South Korea unite they may lay claim to the greater Goguryeo area via might = right rule as currently the South Korean armed forces are opponents to the North Korean military, but a combined North and South Korea would make a phenomenally powerful army, so while right now if either of the Korea's demand China to give it back. China with its massive armies in a region filled with tanks and infantry anyway due to the Demansky Island / Zhenbao Island build up that nearly bought Russia and China into a massive war. The PRC government could have said MAKE ME.

I digress yet again.

The sticking point is this

Some people say that Goguryeo Kingdom belongs to Chinese heritage and others argue that it belongs to Korean heritage.

In my opinion, it is hard to say the kingdom belonged to one country modern China or modern Korea because when it existed. For starters modern China didn't even exist before 1949 with the foundation of the PRC, I'm not so sure about the modern governments of Korea but I am pretty sure the modern versions did not exist before the second world war.

Goguryeo had existed in a period where land borders were not absolute. With Islands such as Japan and even the UK this isn't clear cut either as Scotland vs England border and Hadrian's wall . Even Japan in the Sengoku Jidai period borders between kingdom states was in flux. So it is hard to say the absolute borders of ancient China and ancient Korea. And China isn't exactly a stable place between 220BC and 1949AD, as the changes of power from the Song, Jin, Ming Manchu Mongols etc etc is far too extensive to list.

But is goes a bit deeper than that too, in that there is an inter meshing of societies, much like the UK has a Scottish prime minister or James I who was a Scot and became king of England (I think). In that although 1421 by Gavin Davies is often considered a work of fiction the fictional elements mostly remark on the voyages of Zheng He 馬三寶 rather than Imperial Ming history. In that in Zheng He was sent to ask (ask is a loose term in that it may well have been under duress i.e. give or we will TAKE) was sent to the Kings of Korea to demand virgins to fill a wing of the Forbidden city. If you've been there the Forbidden city built by Zhu Di 永樂 is it massive and could have fit 100s if not 1000s of not 10,000+ concubines .Considering the life of the emperor in ancient china was to smoke opium and have sex multiple times a day with multiple partners as it was seen as something that would give longevity.

Also that Zhu Di 永樂 himself may have been half Korean since in Ancient times emperors would have lots and lots of wives and would sleep with all of them.

In my own opinion Goguryeo probably did belong as an independent state amongst many other independent states and was annexed slowly over time, in that even in the Seoul Museum it showed maps that showed a shrinking Korea over time. In that the Chinese had nearly 800 years to move their fences ever so slightly, everybody does it. As my dad says the Russians have stolen 10,000 Hong Kongs in the annexing of land under the power of the gun for the past 100 years.

BUT! All empires fall, it is just a matter of time, the Romans, Alexander the Great, the Mongols, France, Spain, the British all made massive empires for their times. They all declined and fell.