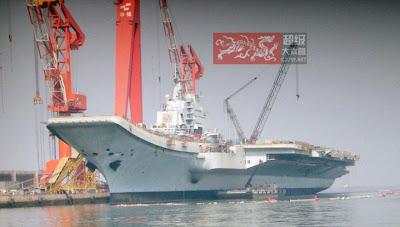 As a runner to the previous post China has launched its first aircraft carrier, the refitted Varag, which some how a Macau firm bought it from the Ukraine, and told the Ukrainians they were going to turn it into a casino. Its supposed to be a training carrier, and they're going to cut their teeth on it. But then again this is one of 4 Carriers China is currently building, the fact that it has no battle group and because it has no catapult (thus lighter launches) the Nimitz would eat it for breakfast.

TBH I think its a dick waving contest as its a pretty exclusive club. What with the Americans (11) The Russians (1) Brazilians (1) India (2) and the French (1). Meh the UK no longer has any of the mini carriers anymore.

But what boggles the mind is that it goes again an old Chinese parable. In that China was humiliated in 1999 over Taiwan when they rattled sabres at Taiwan. The USN 7th fleet had a little cruise around Taiwan. In that China has been spending years on designing weapons specifically to take out carriers. While at the same time stockpiling Russian ship killers like the Moskit which apparently can defeat the Phalanx CIWS of the USN.

An in joke from a Navy buddy from Plymouth, he said if you ever hear the Phalanx open fire you should jump overboard in direct contradiction to this video:


Anyway the parable is of a travelling salesman (a euphemism about a bloke who sells guns in the UK) during the three waring states period. Think snake oil salesman in the Midwest of the USA claiming to sell a tonic or to make rain. Anyway this sales man was pretty bad. Who quite frankly was dumb. First he woo'd the villagers with a shield which was indestructible and could not be penetrated by anything. He then advertised a spear which could penetrate absolutely anything and no armour and no shield would offer any protection. While he was proudly advertising his products, a man in the crowd asked him "what if I stab your shield with your spear? Bewildered by his own words, the craftsman was at a loss for a suitable reply. The crowd broke up laughing and booing.

The moral is that you should not hold a contradictory position. 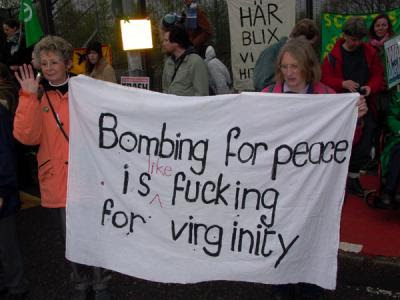 Simply if you've spent billions on developing a missile to take out carriers, why exactly are you building carriers yourself?