Why do some men here in China have long finger nails on their pinkies, but short nailes on the rest of their fingers?

Erm pinky? (Had to look this up) first thought was this:

There are many reasons for this:

Fashion is self explanatory

Status is to do with not appearing to be a peasant type who has to make a living working in the fields or as a manual laborer in the sun. People in China town were a tad arsier to me the other day after hanging around sunny drop zones and getting a funny tan. You know the kind where your sunglass covered bits don't get tanned but the rest of your tace does. Anyway I mean if you had long nails like this it would be hard to work in an agricultural environment right? That old chestnut again. 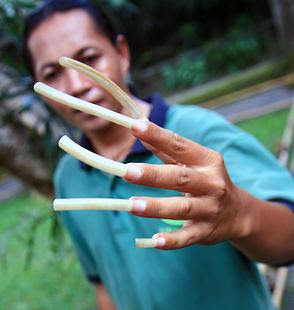 Next is excavation, not just this

But people digging in their ears, teeth and more horribly their arses..... i.e. smell my finger.


Finally there is another luck/superstition reason as to why many men keep a long fingernail on their little fingers. It goes back to palmistry. According to palmists folklore and the bloke down the pub, if your little finger is longer than one of the joints on your ring finger (it varies from who you hear it from) say the first or second joint then you will become prosperous. Men will often cheat by growing their finger nails so that it is sort of longer than their ring ringer joints since it is probably cheaper than limb lengthening surgery (which incidentally is illegal in China).

Looking at my hands and the fact I don't have a pot to pish in currently and the fact that my finger is a good 9mm shorter than the last joint on my ring finger. If folklore is to be believed then it is the second joint. Which means I'm a bit fookered then, of course this is merely folklore as I know plenty of Yakuza like types who are missing bing chunks of their little fingers through accidents rather than cutting off of. And they are loaded.