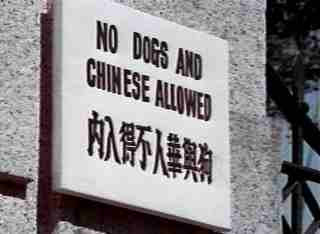 I'm a British Born Chinese my parents are originally from Kowloon. I get the impression that my parents give to me that they are racists, not just against clearly different people but against other Chinese people too especially mainland Chinese people, Taiwanese and other Southern Asians whats the deal?

Is what I am experiencing normal?

Chinese are prone to racism as much as any other ethnic group. I found that Chinese like to differentiate themselves as Hongkies vs Mainlanders growing up. And this view remains to this day as HK people consider themselves to be a tier above the mainland Chinese. And consider the mainlanders to be bumpkins or terrifically backwards. This infects the expats too as BWG makes un-flattering remarks about mainlanders sometimes. Those that venture out of the Gweilo ghetto of the mid-levels that is.

Though some of them are completely deserved of course, as stereotypes are often grounded in some form of reality. The way Mainland Chinese are incredibly wasteful. You hang around Beijing and you see cars with their air conditioners on yet the windows open. Or way back in Hangzhao when I managed to stay there for a week. The guy I lived next door to was nuts.

In winter he would turn the heating on, nothing abnormal about this right? But he'd just twist the thermostat to maximum. Still nothing wrong with that either. Yet when it got too hot he turned on the air conditioner again to maximum and again when the air conditioner lost the battle opened the windows. Some very strange behaviour is reported by others too when they open windows and turn on the air con unlike us westerners with high electricity bills that shut the windows and keep the cold air in. And yes this is Representative of what I've seen in China

Anyway as an anedote from one of my friends "As I began working overseas, I saw segregation between Malay, Singaporeans and Hongkies, while South and North China are prejudiced towards each other, and don't get me started vs Taiwanese!"

But all of Chinese (esp gals) tend to extend otherwise unjustified high-regard for Gwailo. White supremacy. Likewise, anybody darker-skinned (Indian, SE Asian, black) are lower-class. It's like their world is monochrome.

Answer then is: Yes they are racist, but this is simply human nature tbh.

However I don't think it's limited to a Chinese phenomenon. People of the same race but from different geographical locations always have hatred and rivalries.

In the UK for example:

Even in Hong Kong itself. The Cantonese hate the Hakka but hate the Mainland Chinese more.

The Mainland Chinese hate us S.A.R types as we come over as snooty cunts to them.

The Hakka pretend to be Cantonese but bitch about the Cantonese in private and hate some of the Mainland Chinese.

Curiously there are even more subdivisions.

The Hakka are split between the fishermen and the farmers, they used to hate each other and celebrate completely different festivals. While my dad's village the village next door hated them and vice versa.