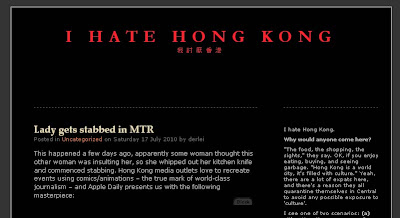 I thought I'd post it here. Namely because anything which contradicts you or makes you look silly you delete. Suffer from a Chinese face issue? TCG deletes nothing from this blog bar spelling mistakes. EVEN if it makes me look stupid. Must be this western mentality and the fact that I wear my scars with pride, maybe why the CBR needs a respray.

So simply if you hate it so much why don't you leave? There is a big airport jst 40 minutes away.

Really why do you stay? I can only think of several reasons:

Education? So why don't you transfer your credits from your university to another one? Simon my German PhD totting friend left Germany for France part way through his degree. He then left France during his MA and moved to North Carolina. Then he moved to Seoul, then Shanghai and has managed to transfer his university credits each and every time.

And seriously why did you come to HK to study? The universities there are not exactly the best in the world either. There are a large number of universities in Taipei.

A job? So what! I've quit jobs and moved elsewhere before. I've ended up all over the place looking for work. I even lived in Hamburg where they speak (unsurprisingly) German.

TCG is departing Manchester within the next month! I can do it so can you.

Quite simply when you move there is no such thing as paradise on earth. (Seoul gave us the jitters as there was definitely something wrong with Seoul) You exchange one set of problems for another.

So while in Manchester there is high crime, low employment and constant rain there are wide open spaces where you can travel into the countryside after only a few minutes. An hour in each direction gets you to some of the best biking roads in the UK.

HK you trade your job/education prospects for the unpleasantness which you appear to suffer.


Insanity: doing the same thing over and over again and expecting different results.
Albert Einstein

Granted I bitch on HPC a lot about the UK but in doing so I am willing to be told I'm wrong or beat down by other peoples opinions rather than uber censorship you practice.