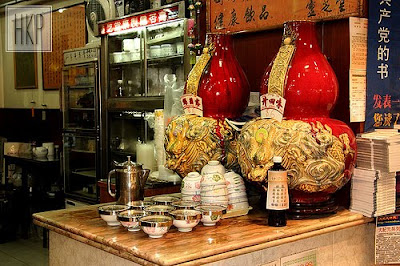 Its currently -6 outside which isn't too bad. The cold doesn't bother me too much, riding around on a motorbike in summer gear is something I've done for ages. The problem is the pain it causes me, old injuries ache when it gets too cold. But thats more to do with windchill than actual cold. Myself and Kim (who else!) in Seoul last year spent ages in the ice bar in Seoul. Considering outside was 100% humidity 40C we went inside and didn't come out for ages..... the Korean barman could only stay inside for a few minutes at a time and would go outside. Kim (being from Dallas, and also having lived in Santa Monica) was also fine with staying in the freezer. Heh we asked the barman to turn on the air conditioning as we felt hot even inside the meat locker.

No I dont mind the cold at all.... instead I mind the potions which Chinese people are supposed to drink to keep themselves fit. As with 粽子 I live near an awful lot of old Chinese women who's children have had the good sense to move far far away. They are generally bored, and lonely and thus come to pester me sometimes. In response TCG spent an afternoon showing them how to get online and they pester me an awful lot less. However since it first started to get cold I've been given lots of 24 herb tea..... urk..... they will stand and won't leave until I've drank it. Today its 1046am as I type this and I've had two batches already. This tea is classic snake oil type stuff and it has a scatter gun approach to what it cures.

I can say it works, not because of the stuff in it, because it tastes so incredibly fowl and bitter, like when beer tastes when you've had too much, but worse much worse. It makes you gag and forget all about your pains elsewhere. Much like the classic pain relief when you hurt yourself when we were all children. Whereby to 'relieve' pain say a headache people would stamp on your foot. Because the stamp hurt more you'd stop thinking about your headache.

Strangely though it does kind of work, maybe it is psychological like placebos. But then again going to see the Doctor in the UK can take anywhere from 3-8 weeks to get an appointment by which time I feel better already.

My dad swears by the stuff and has a bowl every day as he passes a small shop as in the picture above where they serve it daily. He is pretty old however, so is my gran and she drinks it daily(ish) too and she's pushing 100.