When NO means NO! 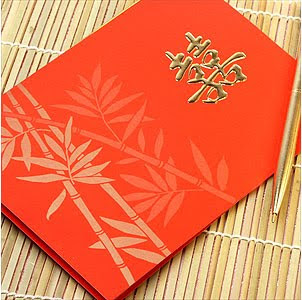 Dreaded mail for face conscious piss poor Chinese people
It seems a lot of my contemporaries are getting married all of a sudden. TCG being the only male Representative of his family in the UK gets wedding invites. Some how they got a hold of my address. TCG hates Chinese wedding invites because they are greedy beyond belief!

In a western wedding you normally invite your mates and have a wedding list 99% of people will buy a cheapo toaster because it is cheap, quid pro quo as the married couple you throw them a massive party with food and booze to compensate for the cheapo toaster. But really this is to celebrate with the happy couple and to watch them take steps into a new life. Well thats what it is supposed to be anyway. Though marriage is going out of date anyway (here). But modern Chinese weddings are something else entirely.

Chinese weddings are different. Chinese weddings are an advanced form of avarice which utilises face and shame to extort people out of money. TCG apparently has no face in his immediate family. The devil may cry since I don't particularly care at all.

Chinese weddings the bride wears red purposely for the intents of extortion. In that a Chinese wedding is different, you invite ALL your friends AND enemies. On the invite it used to be implied to bring some money to 'give the happy family a good start in life' today the feckers specifically ask for money and put minimum amounts. Inflation is pretty rampant (anybody seen the price of gas in the UK these days? Petrol and natural gas that is I felt violated as I put in petrol into the car @ £1.23 a litre today to you Americans that's $2 a litre! or $8.50 a gallon!).

My cousin has made this extortion into an art form quite simply he gets married and divorced every 18 months and guessing by the rubbish receptions and the number of people who turn up he makes £15,000-£20,000 in profit each time.

Anyway I digress. Today wedding invites specifically state the amount of money to bring. Hence the way to maximise your profits is to hold a shitty wedding reception and to invite everybody even tenuously related to you. Common tricks to maximise profits are to hold them in shitty locations, this was lampooned in City Japes...back in 1987. Where cookie and So get married they hold it in a terrible location so people can't come. For instance in the UK most Chinese people live in Manchester/Liverpool/Birmingham/London areas. These areas contain China towns which people gravitate around. However invitations I have seen recently have been in Scotland, or even Cornwall which are by no means remote but take ages to get to.

The other way to maximise profits is to have a terrible reception. I'm actually against uber weddings the kind that cost £10000+ since it is only a one day event but then again if you expect me to give you £500. I don't expect a bowl of rice and a single big bottle of beer to share between fifty people.

The nasty thing is EVEN if you do not attend you are supposed to by custom pay the money, even if it is your mortal enemy. TCG's dad will always pay no matter what wedding because he cares about face.

TCG has struck a blow for austerity and modern attitudes though quite recently! TCG received an invite from a mortal enemy of the family and I sealed it up and put it into a post box again with rejected on the front.

Here is the nice bit. The last party I did not attend but by sheer coincidence managed to happen to be in the same building for everybody tried to do the you have no face you are an outcast! This kind of BS against me.

TCG curtly replied back..... why should I pay for a party I'm not going to, in fact why should I slave away at a job I'm not exactly in love with only to give you a big chunk of my pay cheque for nothing in return? The elders tried the BS it's only £500. As if it is a tiny amount of money. (My extended family in HK think I am loaded to the gills but they only look at my income not the expenditure. I was so tempted to say if its such a small amount of money then why don't you give me £500?). Rather than rant and rave about how £500 is not a small amount of money. I simply decided to go elsewhere to eat. But I think I felt that I generally struck a chord with the younger folks. Since the younger folks don't make much money themselves.

Meh, they had to use me as the hatchet man to plant such seeds of doubt into ridiculous traditions. But I suppose I've always had a minor talent to be able to capture the feeling of a crowd. This is bad because it is a charactoristic shared by nut jobs you know like Hitler! Or Stalin

But seriously.... the excuse, because it has always been this way no longer cuts it any more.

People in China (if they can read this) or HK will probably gasp OMG what a punk! Somebody should show him some manners and respect......but seriously guys do you really like paying shit wads of money for this kind of thing?

Yes? Then keep on paying then.