Does Chinese traditional medicine work? Have you ever tried it?

Firstly when you say Chinese medicine what medicine do you mean? As there are quite a few mainstream and non mainstream Chinese medicine types. Off my head I can name several, Gua Sha. Which is where some old guy rubs you with a furry stick. It does something funny because you get all sorts of bruises all over the areas where he rubs you. I have tried this in Beijing in a back street. Once, the guys at the hostel thought I'd been beaten up and mugged from the bruising which appeared all over my body. Apparently the more bruising you have over your body that appears the less healthy you are. At the time I was pretty sick. There is acupuncture, there is also herbal medicine. There is Chi gun, which my dad believes in, he has met many fake practitioners though. He met a real one years ago who cured his bad back, which is why he sits on the wall. There is also 跌打酒 (Deet Cha jow) which is commonly made in Chinese people's homes which is a kind of wine which you rub into wounds.

My answer to this is rather sitting on the wall. This is due to conflicting thoughts of various kinds. Firstly EU law says no. The EU says no fucking way can you sell Chinese herbal remedies. Which means Dr Herbs 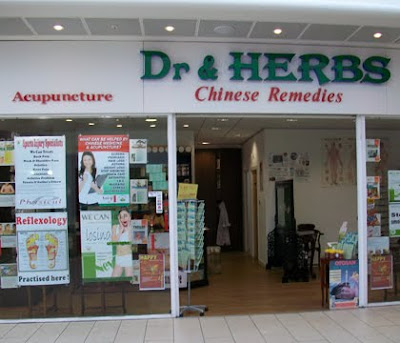 Is absolutely buggered as they can't sell anything on April 1 2011 a couple of months away. Also that a lot of alternative medicine is discredited such as hydrotherapy or Chiropractors. Also the fact that the FDA tends not to give licences out to this stuff. Also a lot of the cures are anecdotal. While western medicine to get a licence for it to be distributed you need to conduct lots of studies fake some data and suppress your negative findings. What was it Paxil? A friend in London was once on that, it was an antidepressant. It had a strange side effect that made people suicidal. And numerous drugs which have nasty side effects but the info was suppressed. (And this stuff is supposed to give you confidence)

On the other hand.

However I have been ill as a child and no UK doctor could diagnose or cure me, so my dad being my dad took me on a jaunt to China. Where I came back completely cured after various horrendous herbal remedies usually some kind of black foul tasting medicine. The doctor at the time was at a loss as to how this had happened (the cure) and probably wrote in my medical notes that I was pretending. Years of pills seriously messed with me as if I would pretend. Though the cure being a horrible potion boiled up from several packets was pretty awful in taste and aftertaste.

Also with 跌打酒 my dad has used tons of this on me and himself, my bruises and soft tissue damage when treated with this heal significantly faster than untreated wounds. For example both my knees are knackered (a Russian motorbike ride was the killer blow). I'd sometimes crash and land on my knee. My left knee has been treated regularly each time. My Right knee has missed two treatments from when I lived away. My right knee hurts a lot more these days. Though these could be attributed to mere coincidence or a placebo/psychosomatic effect or the rubbing effect the olde' salt into your wounds... is it the salt or the rubbing?

Also these alternative medical practitioners have been around for centuries, a medicine shop a tiny one in Hong Kong my dad trusts and uses has been around since the 1700s when HK was just a fishing village. Some in Beijing are even older. If they sold snake oil then why would they still be in business? HK is a good example as it is a westernised city and people will still turn to such medicines in addition to western medicines.

My thoughts are that it may work. My reasoning behind this is that the ingredients which they put into the things you drink or are rubbed into your skin could possibly contain active ingredients which do the job. However there has been little refinement of the ingredients perhaps due to technology. Remember China has been an agricultural society for quite sometime. Some stuff has been refined by western medicine such as Ginkgo Biloba. A Chinese apothecary also has tons and tons of stock which takes time to get through. Finally if it does work why the hell would they help western type medical companies develop it? The indians who helped out the settlers that came to the place which became the USA had an unhappy ending (for the Indians anyway).

But these are my thoughts and I could be wrong.