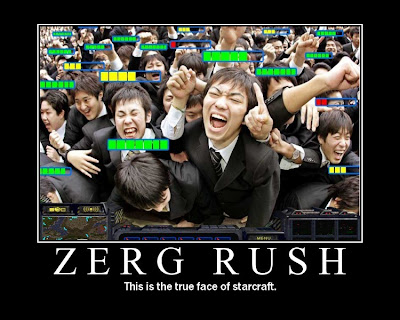 Hi chinese guy, nice blog you have here, i have a question. What age do Chinese men usually stop playing computer / video games? I just moved in with my boyfriend, a chinese man and he is 27 and he still plays computer games every night!
Thanks Sarah!!

Having a look at my Chinese contemporaries in both HK and the UK I'd say it varies, heavily. Generally as they are an escape from the usual drudgery of life. I mean what other artificial reality can we be superheros and or gun people down without consequences and lots of cost? Hell my day to day life isn't filled with thrills either. In Hong Kong many of my mates who work in office jobs stop by internet cafes have a few games of counter strike or something then go home. But they all tend to live alone in sardine can sized flats.

Myself I abandoned video games for nearly 5 years on account of having a very very low spec machine which couldn't handle anything more than pong. Also having to regularly study for my ACCA exams. A serious drag on my life I might add. I have dipped my finger back into games now and again but frankly I prefer to go out riding or be fixing something. I only really play when the weather is too bad outside. Which is why you see games mentioned here and there in my blog posts. IIRC Prototype and Stranglehold as well as Rome Total war three kingdoms.

However something I have seen is when they get married and or have children that they are simply too busy to play and therefore give it up. Though this is not exclusive to video games.

Kai was like this, he used to play a lot, then his wife had triplets. And he was busy looking after his three children to be playing. The usual things changing nappies, then having to take them to after school activities when they grew older.

Robbie was like this too, he was a fantastic motorbike rider and we'd tear up the back lanes regularly but when he married (without children) all of a sudden the bike and the gear was put away and he suddenly became sensible.

My dad was like this too, my dad apparently before my birth would regularly go out shooting when such things were legal in the UK. When I came along he had to curtail his hobbies considerably.

It might be to do with the fact that Chinese culture considers marriage to be a sign of maturity. Which is why the second you get married people left right and centre can and will extort you for those red packets of money at each and every opportunity. Peer/society and family pressure may put an end to it too

My point is it varies considerably and there is some causal relationship regarding general business and wasting time. Unless it is an addition or obsession whereby it is affecting his wider life. In terms of work, socialising, relationships etc then maybe you ought to have a talk. Unfortunately however ultimately, you can't change anyone else. All you can really do is either change how you react to the situation, or change who you date. For instance my mum hated my dad's gambling addiction but she never managed to get him off the hook.