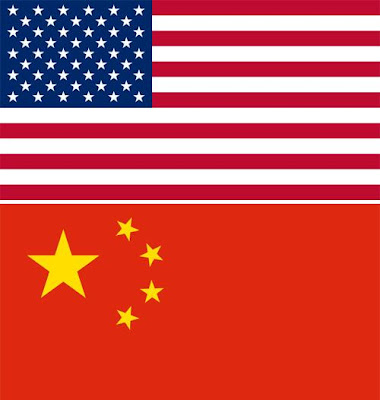 What does the average Chinese person think about Americans?

Is it true that most Chinese people stereotype us as stupid or arrogant? What do they think about our debt problem?

Also I just wanted to say most Americans are not blaming the Chinese themselves for outsourcing. We blame corporate America and the government. You can't blame Americans for not buying American because it is nearly impossible to buy American. I try to buy American clothing but I can't find electronics.

Sorry for the lateness and the general scatter brainless of this post, I spent half a day doing stuff and thus rather than write in one cohesive lump it's has been done bit by bit.

As I cannot really ask all 1.4billion people and the 10 or 20 million who live overseas I can only really generalise. In generalising I'm um...... generalising....

Anyhow it varies. It varies a lot. Lots of factors play into how it varies, where they live, where they work and how much of the world they see. As in every country and society there are good people, bad people ambitious people and those who are content. I would however make a big distinction between government and people though. In university (college) I knew quite a few Muslims who would get all het up and angry about Americans. But they really meant the American government rather than the people themselves.

For starters people in small villages outside the main cities of China will never really have seen Americans in the flesh since tourists tend not to go there and these people tend not to travel overseas either. You could probably make one of those videos about them where Americans are lampooned for their ignorance though these videos are purposely edited to remove all of the good and correct answers from them. Even I TCG have suffered from this.


I am very wary of cameras as I had a nasty run in with a TV reporter years ago. Where there was this smarmy get who was wandering around town poking a microphone in peoples’ faces. He asked me what APR was and equivalent APR. I told him what it was. The reporter looked disappointed in my response in knowing what they were. He then asked me, “Do you think other people know what APR and equiv APR are?”
“I have no idea,” I said. On the evening news they ran a banks are ripping us off as the UK public is retarded feature. It showed numerous apparent numpties saying they did not know what APR was. I was waiting for me to show up to blow them away, at which a cut of me saying, “I have no idea.” Making me look like a numpty and the feature ended


While the exact polar opposite say somebody working in a tourist trap in Beijing or Shanghai will probably have a grossly negative opinion of Americans. Even I got a grossly negative view once or twice when a large bunch of whats the word frat boys came into the bar I was sat in and started to take the place apart after a large number of beers. But seriously it's the bad things that stick in your memory and of course not all people are like that.

In the UK for instance we have lots of stereotypes about Texans. Even my sister has joked about it with me. Because this steers and queers joke has been thrown around in the media for decades. IIRC it appeared in an officer and a gentleman, then in the classic full metal jacket.

Even though full metal Jacket was actually filmed entirely in London,.. there are some extremely non PC scenes in FMJ though like this one. These stereotypes have been played out in sitcoms through the media and tend to be hard to rub off.

Since a lot of heroic movies tend to go to China (and get pirated) there is often a fascination about American culture where everybody is rich enough to drive cars, have large homes and eat lots of meat. China of course only the very rich drive cars, and everybody lives in small homes. Also until recently the diet consisted mostly of vegetables with meat being a rarity. This is why Chinese people in China don't understand vegetarians. Meat is so cheap today that they don't understand why people'd pass up a good thing.

This is reflected heavily in lots of things like ESL because of the fascination with American culture. ESL in China, in fact I could say all of Asia they want image above all else, which is why schools of all levels state and private prefer their ESL teachers to look a certain way. Have a read of this advert. It wasn't till quite recently adverts specifically asked for WHITE people. Thus highly qualified people would be passed up for completely unqualified people of varying quality (I've seen Russians be ESL teachers in China). Primarily due to image as the children think America is better than here. I'd tend to agree with them on various levels. Because in the USA people are told anything is possible. While in China opportunities are limited and social mobility is very limited. I mean the US had a bloke from Austria become Governor of California.

I'd say however the image is deteriorating. Due to various factors.

Online life of what western nations are like, again lots of negative media along with the Hollywood version of things gets to China. Such as this video which even makes me in the fairly liberal UK think blimey. Or those Are Americans stupid type videos that float around youtube regularly.

Secondly CCP nationalism. Although China is a one party state with limited participation in decision making the CCP has to be bloody careful whenever it does anything. An easy way out as the Nazis found out and the USSR used is to externalise your problems. Those freakin' [insert nationality here] doing nasty things to us! It's called rallying round the flag I believe Mr Bush did this a few times.

This is pretty normal though. Remember back in the wild year 2010 when an oil rig exploded off the coast of Florida? Those evil British companies we'll make them pay spoke Obama. Generally to distract people away from the fact that Obama wasn't doing too well in the polls and the economy was on the ropes. They kept on saying British Petroleum, except BP isn't British Petroleum and hasn't been for a while it's just BP with the slogan Beyond Petroleum. Even though it may well have been Haliburton's fault.

Thirdly Bernanke. Who loves the printing press and keeps on printin' those dollars. Because China has limited social welfare, (welfare is only claimable if you go to the village of your birth_ and non socialised medical care people save. The saving rate in Asia is pretty high, if you save loads of money then you have um lots of money. Since RMB is pretty much the US$ due to the nearly immovable peg. This means that when Bernanke hits the print button it devalues the savings of millions of Chinese people. Which peeves them off a tad. This links into the debt problem as you asked originally. China is the creditor to the USA (along with UK,Japan, Korea and other nations) . Again it varies, some of the people I've met around Beijing think it is neat as it helps their exports. While others think it is less so because the $ held by the PBoC can be devalued by the printers. A big example of this was back in 2008 when I was in China for some reason I can't remember. A a radio talk show about this back in 2008. Where there was a huge amount of anger from the money printing. Comments like CCP policy gifted the USN several carriers due to the debasement.

But keep up the non buying of China made stuff, I do probably because I have some pretty neat made in Europe stuff and do to my strange physical shape.