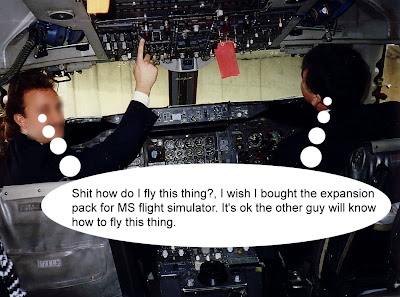 A great Chinese tradition continues..... ok so this happens in the western nations (Lies on your CV) . We've had fake eggs, fake soy sauce copied phones etc and the list goes on... but then again when travelling in China I always tend to use Korean airlines (partially because the air hostesses tend to give you their phone numbers when you ask for them and they will actually go out dancing with you) or the train. But a great western tradition of lying on you CV has come to China which is not a surprise because of the intense competition for jobs there.... it kind of sucks when it is a pilot or something though. On the other hand we shouldn't be so smug as we have fake pilots in Europe too! Or Ryan Air where they want one pilot but again this is a publicity stunt as per usual As O'Leary always offers outrageous suggestions for saving money on his flights. Like standing room only flights and pay toilets on board.

BEIJING (AFP) - China is investigating its commercial pilots' qualifications amid revelations more than 200 of them lied on their resumes.

The probe comes after 42 people died on August 24 when a Brazilian-made jet flown by Henan Airlines crashed at a small airport in northeastern China's Heilongjiang province.

Fifty-four passengers and crew survived the crash, in which the plane missed the runway, sparking speculation that pilot error was to blame.

The investigation into qualifications was launched by the Civil Aviation Administration of China (CAAC), the country's aviation regulator, the central government's news website said.

Between 2008 and 2009, the resumes of more than 200 Chinese commercial pilots were found to have been falsified, the report said, with some of them embellishing their flying histories.

At least half of the pilots worked for Shenzhen Airlines, which owns Henan Airlines.

"Some pilots changed their jobs many times and they constantly distorted their resumes," the report said.

"Some of them were former military pilots and became civil pilots, after being discovered a lot of them were grounded and had to go through re-examinations and re-assessment."

Investigators looking into the Henan Airlines crash were focusing on the qualifications of the pilot, the report added.

Previous media reports have said the pilot survived the crash, but was badly injured.

The government would also check the qualifications of other industry workers such as flight trainers, airline investigators, repair crews and air traffic controllers, Monday's report said.

It gave no figures on the number of people involved. China had 11,000 commercial air pilots in 2006, with hundreds added annually as the domestic aviation industry grows rapidly, according to previous media reports.

"We must draw a lesson from this painful air accident and figure out how to control the quick development (of the industry) and use quality demands to stabilise and slow development," Li Jiaxiang, CAAC head, was quoted by the government report as saying.

Authorities have already ordered safety checks of the country's fast-growing civil aviation fleet of 1,300 planes in the wake of the disaster, China's first major air disaster in nearly six years.

Some online chat rooms, the main outlet for relatively free public expression for millions in China, expressed outrage over the resume revelations.

However, the lack of a major disaster for six years despite head-spinning growth indicates China has done a "brilliant job on safety," said Sydney-based aviation analyst Derek Sadubin.

"They have had rapid growth over the past decade and have been trouble-free, basically. They have a safety record that is highly regarded," said Sadubin, of the Centre for Asia Pacific Aviation.

He added that Chinese carriers have continually upgraded their fleet, giving them one of the newest collections of planes in the world.