They Say History Repeats Itself

added by KaiWen
Most readers of this blog are probably aware of the history of Taiwan and its role in the Chinese civil war. As Chang Kai-shek and the Nationalist Army lost more and more ground to the Communists, they retreated to the island of Taiwan where the government of the ROC rests to this day. Since then, it has been sort of a cold war over the Taiwan strait. But what if I told you that almost the exact same thing happened 400 years ago? Well it did. In 1661 Zheng Chenggong or “Koxinga” a loyalist to the Ming Dynasty and Arch Commander of the Ming Army, wanted to do whatever necessary to resist the Manchu invaders that would later establish the Qing Dynasty. Even after the Manchu took Beijing, the Ming Emperor retreated to Fuzhou. However, his army was unable to resist the Qing forces, he was captured and executed in 1646. The last member of the Ming Imperial family, Zhu Youlang had fled to the southwest. Koxinga and the remaining Ming troops were cornered in Fujian Province and unable to help Zhu. By 1661, the Ming Emperor sought asylum in Burma. At first the Burmese king gave him refuge, but after numerous threats from the Qing, he was rejected and eventually killed by Qing forces. Meanwhile, Kongxia, seeing defeat as inevitable, evacuated his forces and other Ming loyalists to Formosa (Taiwan). At the time, Taiwan was under control of the Dutch East India Company. Despite being in the face of westerners, Koxinga was quickly able to annex the island as it was nothing more than a trading post with few military personal. After booting the Dutch from the island, he established the Kingdom of Dongning with the goal of reorganizing his forces to eventually recapture the mainland.

Chiang Kai-shek Kongxia died in 1662 of malaria. His son Jing then took over as leader. Jing had attempted several times to launch an assault on Fujian but failed miserably. He entered a depression, indulging in liquor and women until his death. After his death, the generals debated his successor, but eventually Zheng Keshuang took the throne. After losing the island of Penghu to a Qing invasion, Keshuang surrendered Taiwan to Qing rule. 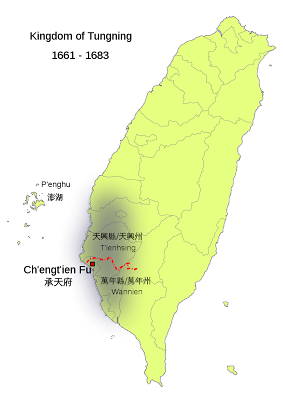 The similarities are startling aren’t they? Koxinga is revered as a hero in Mainland China because he ousted the Dutch “imperialists” and brought the island into Chinese rule. He is also regarded by the Kuomintang as a patriot who went to every last length to protect the Ming throne and repel the invading Qing. They also frequently compare him to Chiang Kai-shek. There is also a shrine dedicated to him in Tainan city. 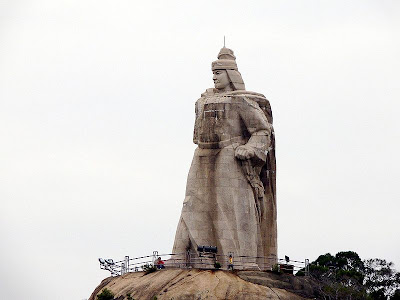 If history does indeed repeat itself, it is only a matter of time before Taiwan is annexed by the PRC. However, Koxinga did not have the potential backing of a military power (The United States) to act as a significant deterrent. Then again, it is a rule of thumb in Chinese history that eventually a dynasty loses the Mandate of Heaven and comes to an end. And eventually, the Communist dynasty (or as I call it the ‘Mao’ Dynasty) will also come to an end like all those before it. 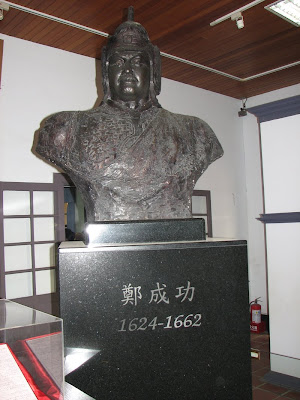