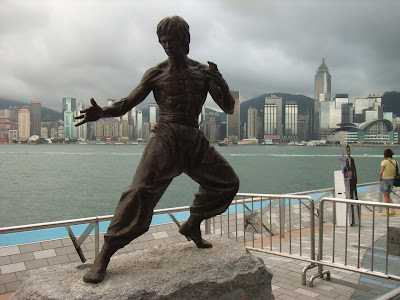 Not that I like to smear the name of the dead

Namely as Bruce Lee managed to get TCG beaten up A LOT in school. Note that the areas TCG grew up are not exactly Representative of the UK. Where Children carry Uzis and we have places called Little Beirut or Gang banger alley or rape city.

He also got my parents beaten up lots of times and a lot of my peers beaten up a lot too.

Quite simply people would watch a Bruce Lee or Bruce Li, Lea, Lie, Law,Lo etc etc etc film and think all Chinese people could fight like that. Therefore they would start fights against you. But because they thought you were hard and you could kill them in an instant they would fight you in very large gangs. At the end of Enter the Dragon, the bad guys conveniently queue up one by one to be dispatched by Bruce. In real life they rush in and beat you to a pulp. TCG is on first name terms with the doctor who would reset my nose every few weeks while I was a teenager.

I did however learn to fight eventually and even though I was beaten to a bloody pulp after standing up to them they soon stopped and grew out of it. Back in the 1970s Just before Bruce died something would happen to my dad (who did work in restaurants before going onto driving a van for a short spell) and his friends. Though not so much in Cornwall as my dad and his mate used to brew lots of cheap beer.

Would come into restaurants eat shit loads. They would then walk out when a waiter attempted to stop them they would say some shit like.

"If you can knock us out we'll pay you."

They would then start a massive fight trashing the place for the hell of it. Bruce Lee copied this real life story for the film Coliseum. Until three things happened. The Chinese community really did start fighting back. I have a story whereby I'll tell you in person, but it is about a man with a hammer and three big beefy blokes who ended up eating through straws for the rest of their lives. And also when a Wushu master came from Guangzhou and there came a rep that Chinese people fight back.... which incidentally placed the Bruce Lee effect on ME and my Chinese peers.

However all the people who stayed in HK and China during this time still look up to him (in some ways) because of the stardom. But they never experienced the wave of violence he admittedly inadvertently caused many overseas Chinese. Though of course this might just have been strong picking on weak, but when people growl at you like Bruce did on the silver screen there is a connection there too!

Though curiously James Kim the Korean guy I met from New York said Koreans suffered much in the same way when he was younger. Though it was more that they seemed to be weak and the strong tend to pick on the weak again. Though I can only name one Korean Martial arts star Hwang Jang Lee who always got killed by Jackie Chan in almost all of his appearances.