Foxxcon he said she said.. 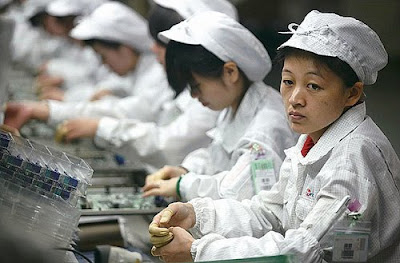 Foxconn, the Taiwan-headquartered manufacturer of products for Apple, Sony, HP and a host of others, "strongly and categorically rejects" recent — and not-so-recent — accusations of worker mistreatment. The company's arguments, however, may be motivated by more than a pure desire to set the record straight.

"Foxconn is certainly not perfect," reads an email sent by Foxconn to The Reg after our recent report on a leaked study that details company abuses, "but we take our responsibility to our employees very seriously and we are committed to giving each and every one of our more than 937,000 employees in China a safe and positive working environment and compensation and benefits that are competitive with all of our industry peers."

Foxconn's lengthy email — which you can read in full here (PDF) — specifically rebuts four charges made by the leaked study, which was conducted by a group of academics and students, and based on reports by 14 investigators who, according to the Beijing-based, government-affiliated Global Times, were able to "enter the company and experience 'life inside Foxconn' themselves."

After a recent spate of suicides at the company's plant in Shenzhen, China, Foxconn reportedly began a program to raise workers' wages. The leaked report, however, as reported by the Global Times, noted that although raises were announced to be in the 30 per cent range, "employees saw a rise no higher than 9.1 percent and were deprived of many of their welfare terms like subsidies, bonuses and so on."

Foxconn disputes this allegation, saying that employees will receive their raises in their paycheck for the month of October, "due to be received in the first week of November."

"In the case of Shenzhen, where more than 500,000 of our employees work," the email states, "the minimum wage has been significantly increased to RMB 2,000 per month [$300, £190] and this is in addition to benefits including free or subsidized housing and meals, medical coverage, and other government required insurance and trust funds. Contrary to the allegations included in some media reports, these wage increases have not included any reduction or elimination of any benefits or payments."

Foxconn's email devotes significant ink to detailing its overtime policies, despite the fact that the leaked report, as reported by the Global Times, makes no specific allegations of overtime abuse other than noting that although interns can legally work only eight-hour shifts, "at some of [Foxconn's] plants, the interns have a workload of over 10 hours with some even being forced to work night shifts."

Noting that guidelines set by the global Electronic Industry Citizenship Coalition (EICC) call for no more than a total of 60 hours per week including overtime, Foxconn reports that average monthly overtime "for employees volunteering for such work" was 57.3 hours for June, 58.5 hours for July, 59.7 hours for August, and 63.1 hours for September. It notes that the overage in September was "to compensate for the Mid-Autumn Festival."

The Global Times reports that the leaked study came down particularly hard on Foxconn's policies regarding student interns. "No contracts are signed with these students, meaning that the company is exempt of paying social welfare," they report, "and due to the lack of supervision, upon being injured at work, interns cover their own medical expenses, without help from either the government or the firm itself."

Not so, says Foxconn. The company, "like many of our industry peers," does run an intern program in cooperation with vocational and technical schools, "who remain responsible for general insurance coverage for the trainees." However, the company claims, Foxconn provides "a full package of compensation and benefits during these internship periods. This includes housing and meals and medical and accident coverage for all trainees."

The leaked study, the Global Times reports, alleges that Foxconn is "turning [a] blind eye to safety problems in the workplace," and that the company "violates safety standards imposed by the country."

Foxconn disagrees. "Our policy is to strictly abide by government laws and regulations and industry standards to provide not only proper protection to workers but also to provide regular monitoring of the health of workers who may be involved in areas with potential workplace hazards," they say. The company also insists that its "very strict workplace safety rules and regulations" contribute to what it claims is "one of the lowest industrial accident records in Shenzhen."

In the conclusion of its email rebuttal, Foxconn defends itself against ongoing accusations — in the leaked report and elsewhere — that they treat their employee in an autocratic, heavy-handed, and abusive manner: "Our company policy requires that all management and supervisory staff treat our employees and interns with the highest level of respect," they assert, citing their "formal grievance procedures that all employees can use should they have any issues with any aspect of their treatment by anyone associated with Foxconn."

It goes without saying that "respect" is a highly subjective concept, and that "formal grievance procedures" can be off-putting to a workforce which the leaked study claims includes 16.4 per cent who have been subjected to "corporal violence" and a majority who feel "indignant" towards corporate management.

We are left, then, in a "he said, she said" conundrum. Pay levels, intern benefits, and overtime pay should all be provable by a government investigation with subpoena and discovery powers — but as yet there's no indication when the Chinese government's promised report on its inquiry in the Foxconn spring suicide cluster will be released.

There is, however, one promising development for those "indignant" workers who claim abuse, disrespect, and punishment, and who describe working for Foxconn using terms such as "cage" and "prison": the Global Times, which reported on the leaked study, is affiliated with the Communist Party of China's flagship newspaper, the People's Daily.

It's highly unlikely that a news outlet with such oversight would publish an article critical of Foxconn without the Chinese government's blessing.

Perhaps Hu Jintao, Wen Jiabao, and the rest of the Chinese leadership have decided that its time for their country to present a kinder, gentler industrial image to the world.

Whatever the government's motivation, the Communist Party of China approval of an article critical of your company could have been a powerful motivator of Foxconn's 1,200-word argument for innocence. ®