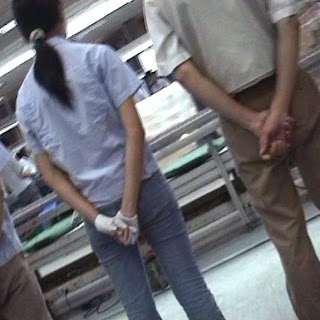 From the register and also the Global times (China based newspaper)

Foxconn is manufacturing or has manufactured products for Intel, Nokia, Dell, HP, Apple, Sony, Microsoft, Nintendo, and others — some of which have stepped in at different times to attempt to mitigate employee abuse.

However, what the investigators experienced during their "life inside Foxconn" will simply add to the company's widespread reputation as a hideous workplace where employees commit suicide, are roughed-up by company goons (and then commit suicide), are exposed to toxic chemicals, and more.

According to the sources who leaked the report to the Global Times, 16.4 per cent of Foxconn employees have been subject to "some kind of corporal violence" — as was shown in a recent video of employees being beaten by Foxconn security.

Over 38 per cent claim to have had their privacy invaded and — perhaps unsurprisingly — 54.6 per cent were reported to be "indignant towards ... management".

This June, Foxconn made news — after a spate of worker suicides — by announcing that it would increase employee pay by 30 per cent. The survey, however, claims that the raises amounted to only 9.1 per cent, and that workers "were deprived of many of their welfare terms like subsidies, bonuses and so on."

Interns were singled out for special abuse. The Global Times notes that interns are only allowed to work eight hours per day, but that in some plants they work 10-hour shifts, and in some cases are forced to work night shifts.

Having no contracts with the interns, Foxconn doesn't have to pay "social welfare" costs for them, meaning that if they are injured at work — "due to the lack of supervision," as explains the Global Times — the interns have to pay their own medical expenses, since they're not covered by either Foxconn or the government.

Chinese law, says the Global Times, requires regular health checks for employees whose jobs bring them into contact with hazardous materials such as are used in electronics manufacturing. One Foxconn employee, however, told the investigators that during his 16 years with the company, he had received "medical support" only twice.

The Global Times quotes the unreleased report as saying: "Foxconn's labor system is characterized with highly-intensified workload, low payment, violent training, all at the cost of the workers' dignity."

As might be guessed, Foxconn's official position paints a different picture. In the company's most recent Corporate Social and Environmental Responsibility Report, the chairman of the committe that developed the report, James Lee, claims that "Foxconn's core belief" is that "happy, healthy employees ... are the Company's most valuable asset."

The CSER report contends that "Foxconn nurtures an invigorating, positive, and equal opportunity environment for all employees," and quotes a trio of young-women workers as saying that "Even though we are miles away from home, the Company provides an atmosphere that makes us feel like one big happy family."

The same company report notes that Foxconn provides psychological support for its workers: "At the counseling clinics in Shenzhen Longhua and Guanlan, there are currently three doctors with equipment to conduct diagnosis of behavioral disorders. To date, the clinics have helped save more than thirty lives."

That life-saving claim, of course, begs the question as to what is stressing those workers so severely that "three doctors with equipment" are needed to save them from killing themselves?

Perhaps the stress is due to the employee-conditions study's conclusion that "The company's strict monitoring makes it resemble a prison."

Or maybe they simply can't deal with the majesty that is Foxconn. After all, as one HR supervisor is quoted in the CSER report, referring to one of Foxconn's mainland-China factories: "All of us at the Guanlan campus have been inspired by the Company's grandeur." ®

Hang your head in shame if you buy Apple products.... oh not because of the above but because Apple products are stupidly overpriced. And less than useful when conventional non Apple hardware does the same job sometimes even better for a much lower price.

And of course spare some thoughts in the vein of you thought your job was shit?

TBH I think Beijing are going to do something really nasty to the company as although such practices are probably wide spread Foxxconn is Taiwanese and this scandal is making people lose faith in the shall we say guidance of the CCP.