Is Chinese beer safe to drink? I heard they put Formaldehyde in it.

Why does Chinese beer give such bad hangovers? Its like worse than red wine!

How come Chinese beer tastes you know a little off?

Chinese beer is safish to drink in small quantities, you see in China they put preservatives in their beer. While in the UK and USA after a long day at work I sometimes crack open a beer and relax a bit before eating etc. They put in such preservatives to give beers a longer shelf life. They put this in as the culture of get home and crack open a beer thing isn't really done in China as much as in western countries even though purchasing power wise the price of beer is pretty darned cheap. Even in Beijing and Shanghai, this is as long as you stay out of the touristy areas. We managed to find a bar in Pingyao where the beers were about 2RMB for a litre.

Even going out for a meal and having a beer or two isn't done too often, people look at me wide eyed as I have a pint with a meal in HK and in China.

"What is this crazy person doing drinking in the middle of the day!" Or they'll share a big bottle between loads of people.

Thus this (adding of preservative) extends the shelf life massively especially since they can stick the beers on long distance cargo lorries and trains all around the country. Tsingtao for example (note Tsingtao is a copy of a German beer btw when the Germans were forced out of the port of Qingdao). They do this because it is cheap and effective., hence the taste.

This has some nasty side effects. I.e. killer killer hangovers. More than once I had to go home (friend's flat) to have a lie down because of the horrible throbbing hangovers such beers and the preservatives induce. The people there do not feel this because they don't drink enough for it to affect them as big bottles are shared and thus they only get small doses. The bender we had in Beijing last year was insane..... we made a pile of Tsingtao to rival the hotel of doom

We paid for this dearly though all being immobilised completely by incredible pumping beer hangovers though, like having a demon inside your head with a chainsaw. While being punched by a gorilla constantly, which was how I felt... those Israelies though for some reason who went out with us seemed not to be affected and they were drinking shit loads of it.

This is made more evident by the beers which advertise no formaldehyde! These days. It like when McDonald's advertised its Chicken Nuggles as now made with 100% Chicken...... it makes you think hold on what the hell were they made of before then?! 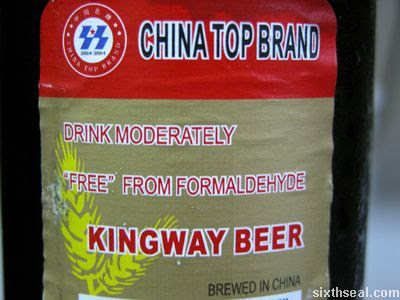 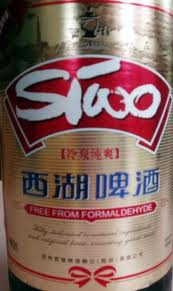 Also in the western world we've had a marketing trend of no MSG! I remember something what was it. It was Newmans Salad dressing. They put on the front NO MSG! In big red text..... instead they put yeast extract in it instead. Yeast extract happens to be pretty much MSG.... So makes you wonder what the hell they put instead of formaldehyde into the beers these days? Since those things still keep find on the shelves for years!

Another theory is that the ingredients are piss poor too the hops, malt and water being polluted to hell as described here thus they are filled with harmful chemicals too to boot. You can read about it here


This is of course changing. But at what rate and scope I have no idea. But of course as TCG recommends.... always have things in moderation and you ought to be fine.