Would you ever do a takeaway? 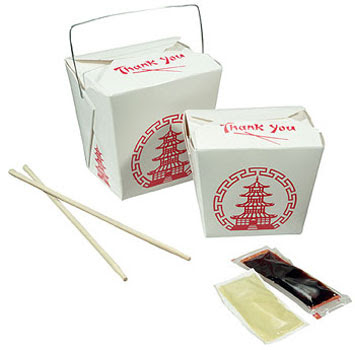 Note these kinds of boxes are an American thing. I've never seen them in Europe or Asia they tend to use foil or styrofoam boxes instead
Hi CG.

I've been reading your blog for a while. I have a question for you fellow Chinese guy, if you ever had the chance to go back to doing the take away type thing which invariably most Chinese peoples' parents tended to do would you ever do it again?

I mean I had to work during my teenage years to help out and the hours were crap and I never got to see my mates but my parents retired pretty rich.

Give then chance TCG would go and snag a takeout place and be terrifically stereotypical of Chinese people (in the past). This is probably because it was easy to get into, required very little start up capital and there were few Chinese take out places back in the 1980s and 1990s the 1960s and 1970s were even better. Though there was the Bruce Lee effect I will explain tomorrow.

In fact I very nearly snagged one quite recently but the person selling it got greedy. For HPCers he tried to sell it screwing me in the process out of a fair wedge of money. The buyer then screwed him back and ruined his own reputation. Therefore nobody wants to buy it off him anymore. He has a crippling overhead on the shop and I yet again am laughing at his short sightedness.

Anyway back on the topic. If given the chance TCG would give it serious consideration. The white collar route hasn't worked out for many people. For instance the traditional avenues of which Chinese children are pushed into such as:

All three sectors are being done over by the economic climate and government. I do not know about the USA or Canada but it is like this in the UK.

Accountancy - this is being outsourced to death, people in Karachi will do these jobs for £3 an hour. When I was an accountant I would be sent out and do jobs for £300 an hour (my firm would charge the company this amount) I saw barely 3% of this per hour! Automation is also taking its toll meaning people who went into this are not doing as well as those in the 1990s before the outsourcing revolution.

Medicine - the UK government trained too many doctors, hence my two cousins who are both medical grads can't find a placement they both decided to leave the UK.

Law as with accountancy lots of it is getting outsourced or done via home packs. Like draw up your own will for £15 type books you find in bookshops.


Anyway I would give it serious consideration because although it is shitty on your social life due to anti social hours there is a nice side effect to this. Uber early retirement. TCG believed the hype about education when he was 16 and went all the way (twice). While his peers went and took over their parents shops. They are now home owners (no mortgage) have fat retirement funds and are near retirement at 35 years old. Bastards.

While TCG's owns zilch property, has a pension pot (a 401K) worth precisely £0.00 and will probably never retire. By 2035 TCG will be cyborgised like the video below

A funnier version of Ghost in the shell is here note this link is NOT SAFE for work but it is the only place I could find it hosted online.


Back on topic, anyway if I had the chance I'd definitely think about it because there is so much money in it. More than any white collar profession anyways. However all is not as cushy in Takeout land. Back in the 1980s and 1990s it was sweet. BTW TCG's dad did not dabble in hot food until the early 1990s. He was a van driver who delivered supplies to hot food places. Except he stopped one day when he had a sawn off shot gun pulled on him. 2000s less so. Simply because it is one of those industries where anybody can enter into it easily meaning the pie gets split into smaller and smaller pieces.

Which is funny really because while working in such hot food places people would always look down on me as if I were scum, same with my family and extended family too. And yet its like hookers it is the one who is in the shitty situation which ends up in the best position of all...