Three drunks and the wine story

added by The Chinese guy
Somebody asked me what this story was a few days ago. Unfortunately I sort of lost the email and the name of the person who did the asking.... I do sort of remember the gist of the question though and it asked what is the Chinese parable of three men and the wine story?


There are many variations of this story and like all stories it changes with the times..... 200 or so years ago it was Chinese men who were drunk who found a jar of wine. In the 1980s it was the Nintendo power glove. In the 00s I'm not sure what it would be. But there will be quite a lot lost in translation. But as per usual it is a tale about saving face...

But the tale is this:

"The night still young!" Shouted one of the men..."lets find another place to drink!"

The searched in vain and did not find another open bar, and had travelled full circle back to the bar they had been kicked out of...... one of the men spotted a wine storage shed was unlocked and found a large jar of wine like this. 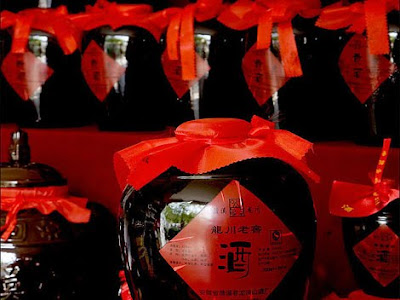 The men can't believe their luck and one of the men grab the jar and drinks a mouthful..... he instantly realises that it's not wine. It's urine..... he isn't happy about it. He instantly says, GREAT WINE.

The second man not wanting to miss out grabs the jar and also tips a large amount into his mouth and again instantly realises that he is drinking urine... he too isn't happy about it... but again he said GREAT WINE.

The third man noticing the 'wine' is quickly being drunk grabs the jar and chugs the rest of it, but quickly realises that he is drinking urine. Again he says GREAT WINE..

All of them embarrassed shuffle off into the night.

The parable is supposed to teach us a few things. Firstly that saving face is not always as great as it is made out to be, in that although you saved your own face (if you were one of the first two to drink) you also dragged others down with you.

Secondly try not to laugh at the misfortune of others as they may well too attempt to save face and bring this misfortune onto you.

Or something like that, I was 14 and trapped on a boat on the Yangtze River last time I heard it. Though because of the crudeness of this story, it isn't often told either.