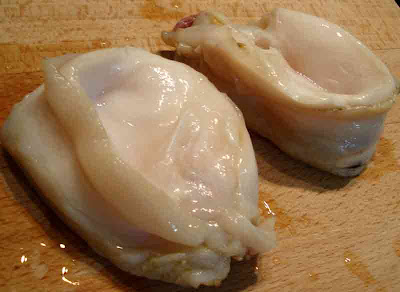 It's probably because Abalone in Hong Kong is expensive.... Chinese people appear to associate something being expensive = good. Dainese leathers are very expensive. I nearly lost all my skin when the Dainese leathers I wore fell apart on a spill once. As many of you will probably be aware that expensive is not always good. Hilariously there were a bunch of French wine tasters who rated a cheap bottle of wine better than the finest vintage wines..

In Mainland China they are even bigger suckers for this sort of pricing. A US beer firm sold a beer in China for $60 a bottle, even when you can buy it from a 7-11 for $2 a bottle.

I've had some and it didn't do anything for me tbh. It is expensive because Abalone is Shakespeare..... wait what? What has a sea slug got to do with a playwright who lived in the 1650s to do with all this?.

It's human nature really, whereby one only says or acts in a certain way because other people talk and act in a certain way. The genetic desire to fit in is pretty strong in all humans, not all but many, it's why you get religions, cults, goths and all sorts of people in between.

So what has this got to do with Shakespeare? Well old'e Wil is revered by many as the ULTIMATE writer of all time and they say things like he is

"everything to all men"

And thus relevant through the ages.... which is absolute bullshit. I remember playing Caesar in school and really being stabbed by pencils and pens before whimpering the line.

Shakespeare is not entertaining to read and I found all of his works impenetrable and could not relate to any of it. He is not everything to all men... he is good because other people say he is good. People will exploit this and will call me a thicko for not being able to appreciate how good Shakespeare is supposed to be. Thus putting peer pressure onto me to say Shakespeare is actually a remarkable piece of work.

The same applies to abalone, because it is so freakishly expensive in Hong Kong. Most probably because of the appalling pollution in Hong Kong. Whereby the water is so polluted Granny Ruth's pointless and easily avoidable death in Dante's peak happens all the time.

The cracked article is here which means it has to be imported in which makes it expensive. People buy it and eat it and are less than impressed with it. Yet to save face they say mmm that was absolutely delicious and worth every single penny, even though they are probably suffering immense buyers remorse. Which continues the circle of deception whereby other people think it is good because other people say it is good sounds. Oddly enough Chinese parables are littered with such examples of saving face in such a manner. I'd share with you but not right now