I have recently moved to Hong Kong, it is nice with some unexpected things but where can I get some solace in Hong Kong? I understand that it is a big and busy city but where can you recommend? 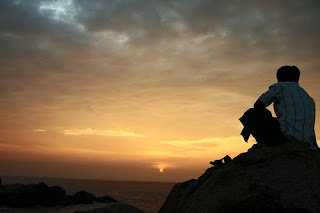 There are places if you know where to look, HK of course being a busy over crowded place with incredible population density of 6,349 people per sqkm. However I know where to look since the crowds and busy people all around tend to grate me sometimes, here are some suggestions you probably won't find anywhere else.

Here are a few locations in which you may find some peace.

榕樹下 and Tung O Wan on Lamma Island - Lamma Island can be gotten to via a ferry and then you need to walk through a fairly rough dilapidated trail to the South Eastern corner of the Island where you will find a completely abandoned beach, that is next to a semi abandoned village. Because of the difficulty in getting there and the general laziness of HK people AND also the fact that there is no shopping nearby HK people are obsessed with shopping. On a weekday even a weekend you can have an entire beach to yourself, considering it is a fairly big beach however the beach is rather coarse sand like the one at Cheung Chau and with more than a few rocks. Note AFAIK last time I visited there are no showers, no life guard and no anti shark nets so be careful some pictures are here and also here. The shark nets are ...shall we say an issue if you are scared of that as in 1995 there were several fatal shark attacks thus the HK government put up 32 anti shark nets here and there. Sharks maybe angry due to shark fin soup.

Much like when I was in Siberia the way some Chinese people abuse bears by having a tap hammered into their gall bladders to extract bile. Such bears may have been out for venegence against TCG especially as he wild camped out of sight in Siberia.


Kowloon Mosque, and Kowloon park, no seriously one of the busiest places in HK right next to it people tend to not be Muslims and avoid the park, meaning that it is often deserted. The Imam may however attempt to convert you.


Here is a picture of Johnathan on the roof top here

They don't lock them for fire safety reasons, to get to the top of the Chungking Mansions simply take the lift to the highest possible floor of any of the blocks (A&B are the biggest terraces) then walk up the stairs to the last 2 floors. Once you are there you will find a hatch like so: 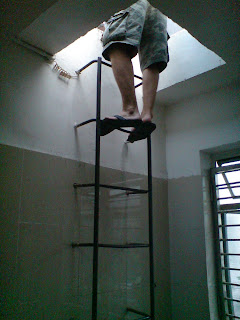 Pull it open and climb up onto the roof terrace, if you are a crazy arse hole like me on Block A&B you can actually climb over the edge and sit on a balcony without any barrier overlooking Nathan Road. However a security guard comes and patrols this area now and again so DO NOT CLOSE THE HATCH while you are on the roof. As the internal locking mechanism will trap you on the roof! Myself and Johnathan had a barbie on the roof. However you maybe alone but you are overlooked by several buildings and thus probably not a good idea to get jiggy on the roof top.

Other roof tops are similar of other buildings too.

Olympic in Kowloon no again seriously this is an incredibly wealthy sterile district, aside from rush hour morning and night the streets are absolutely deserted. I managed to wander around looking for an acquaintance in HK in January 2010 and found the streets almost empty of everything.

Lantau Island Pui O beach this beach is slightly out of reach of HK people (a ferry a bus or an MTR trek then a bus) though there are life guards and a few snack stands this place is often deserted but not on weekends.

MongKok 望角 People will say WTF! But really MongKok ?! It means busy corner! How can this place get me some solitude? are you freaking nuts? HK opening hours mean that shops don't open till 1pm usually so Mongkok cyber centre (see the MTR map) is completely deserted, as free WIFI and air conditioning. Gets busy from noon though.

Hire a Sampan Yup you can still do this, ask for a siu ma tau (small harbour) at Piu O on the main road and you will be directed down a rough country track which leads to a small concrete pier. Every hour or so you get OAPs on small boats who act as a cheapo taxi service $100-$150 should do it, and they can take you on a fishing trip. Ok so you have to put up with the chug chug of the engine and the mad often suicidal Sampan pilot

You can also hire them at Cheung Chau for a short trip between islands. I know this because I was trapped on Lantau Island in 1999 in a typhoon, I needed to get back to Kowloon, the buses were out so I couldn't get to Tung Chung. Taxis were off extorting people elsewhere (they charge 5-1000% more during a typhoon). So WTF did I do? I went and hired a Sampan to take me over to Kowloon just as the typhoon was dying out. It was a rough ride, the boat caught fire necessitating us jumping over onto another sampan boat which crawled along at 0.000005mph but it got me to where I wanted. Note much like taxi drivers and minibus drivers, sampan pilots are suicidal, although at the slow speed they run at you'll be able to jump overboard or at least have ample time to write a farewell note.

HK airport, again a funny choice in that in the departure lounge due to the airport express people do not linger, the cafes at the edges are comparatively expensive and thus abandoned most of the time. The expensive $100 a pint Irish bar downstairs is the same.

Hong Kong Cemetery. The military cemeteries have been moved due to land needs but I believe there is a massive cemetery in Chai Wan (not been there in ages). The fact that Chinese people (myself excluded as cemeteries were useful places to shag) are scared of death and the dead means few people visit them other than during festivals and now and again when people go clean graves and give offerings which means days off and public holidays.


The bonus suggestion is :

Lam Kwai Fong This place is so full of arse holes who are so full of shit wealthy banker cunts and rich children spending daddy's money. People feel so high and mighty and will pay £1000 for a pint of beer cus it makes them look rich (they are average expat packages in HK are 150,000HKD a month and thats LOW) you will feel horribly ostracised and be lonely in a crowd of arseholes. And therefore will suffer psychological loneliness in such a crowd. Note TCG does not go to LKF as he has trouble resisting the urge to stab such people in the face.