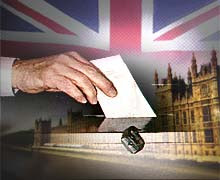 With the up coming elections I thought people may think it interesting (or not) to know how Chinese people vote. This is only my opinion and therefore it may not be entirely correct.

As many of my British readers will know there is an election on May 6th 2010.

So how do Chinese people vote?

Myself due to the fact I may well spent the later half of 2010 and most of 2011 overseas I probably won't vote as it is unfair on those who are left behind to suffer the consequences of my vote. I remember having a massive argument with those who went overseas and voted for UK elections yet had nothing at stake. Essentially voting while overseas is unfair!

Anyway in my experience, Chinese people immigrants from Hong Kong and China of the older and 1st generation almost overwhelmingly vote Conservative. How do I know this? A great many people call me a frigging banana, that is yellow on the outside and white on the inside, although this is mildly insulting it has some excellent uses. In that the majority of people think I do not understand Chinese spoken or written the 3 main flavours* Hakka, Cantonese and Mandarin I'll do a piece on the changing language of China town shortly when I have a moment. Thus people will speak candidly in any of the 3 flavours of Chinese thinking I don't understand what they are saying so I can eavesdrop on them.

I generally am not really a paid up member of Chinese associations but when I go Chinese grocery shopping walk around in China town I hear them discussing and stating their intentions.

The original migrants and 1st generation vote conservative because most of them are entrepreneurial and own businesses therefore Tories are seen as more business friendly. They do this because Hong Kong and the SZ areas of China are overwhelmingly business centric and more heavily biased on making money. Labour type governments are not business friendly they tax more.

The deal as I have said in Asia is different, there is no socialism, the government generally leaves you to your own devices to make a big pile of money when you retire and to fund your own retirement. Those who fail fail hard, the conservatives offer a slightly altered version of this deal and thus many Chinese vote Tory.

Though of course this is just my opinion and from what I've heard in that hearing things on the grape vine doth not mean this is exactly what they vote for. But I think this voting intention is so entrenched that governments of all flavours tend not to need to pander to our votes, like say they do with Muslim or Black groups. But then again there are only 400,000 of us or there abouts according to this . Ha but people like myself and my Chinese friends fuck this up by putting down something else on census forms.


Finally on top of this there is universal dislike for Gordon Brown, Chinese people generally tend to be more economically literate than your average joe they see ZIRP, Zimbabwean money printing via quantitive easing and it pisses them off. Possibly because China invented fiat paper money that had disasterous consequences with the Ming dynasties.