You thought your job was shit?

I saw this in Beijing recently what the fuck? 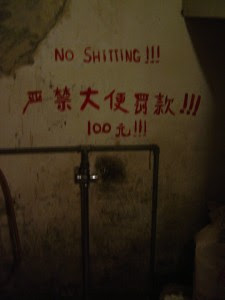 There is a by law in Beijing and many cities in China whereby there is no shitting in the toilet you are supposed to shit by the side of the hole and not in the hole.

A bloke comes and literally carts off the shit in a wagon sized bucket, heh this reminds me of the the bucket of shit fight in the hostel in 2009. Again something in my book, I already give far too much away about my book on this subject.

Anyway the reasoning behind this is toilets without running water to flush away the faeces has this by-law, as if people did shit into the toilet hole without water it would quickly clog up. That it effectively it, the toilets in western hotels and the ones nearby the big tourist attractions are all plumbed in and therefore you will usually see this in hutong more than anywhere else. These are cleaned up daily and when walking around Beijing late night or early morning I would see rather smell such men with carts cleaning out the hutong toilets. Which makes them 'relatively' clean. Compared to say the toilets of government house in Wanchai before 1997, the Manchester Hacienda or the horrible toilet in Azerbaijan and Mongolia whereby I opened the lid and it was filled to the brim and made me sick at the sight of them