Urk Example 2 To be rich is Glorious 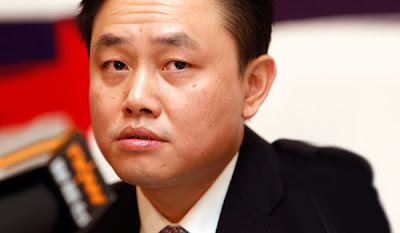 I forget when it was said But Deng Xiao Ping to wrestle control back to the communist party changed his tone shortly after 1989 and said the famous words:

"To be rich is Glorious,"

And quietly abandoned their socialism while still pretending to be socialist (have you ever visited Beijing museums they claim to be Democratic and socialist still). Yeah so in China to be rich is glorious until you get too rich and the CCP want a slice of the action.

Authorities seized another 200 million yuan in assets from Huang, once known as the "Price Butcher" for GOME's low prices. Huang, in his 40s, was named China's richest man in October 2008 with an estimated net worth of $US6.3 billion ($5.5 billion) by the Hurun Report magazine.
He was detained and placed under investigation a month later, and resigned as GOME director and chairman in January 2009. He was held for more than a year without charge, and tried in April in a Beijing court. He stood accused of bribing five government officials with 4.56 million yuan in cash and properties from 2006 to 2008, Xinhua reported previously. The bribes were offered in exchange for "improper benefits" for Huang's GOME Electrical Appliances Holdings and Beijing Pengrun Real Estate Development Company, a private equity group which Huang headed, the reports said. China's Securities Regulatory Commission previously said he was suspected of manipulating trading in two mainland-listed companies. Before his arrest, Huang was revered in the media as a model entrepreneur who rose from nothing by successfully capitalising on China's decades of economic reforms.
After dropping out of school, he started building his fortune in his teens, running a roadside stall in Beijing where he sold radios and gadgets purchased from factories near his hometown in south China's Guangdong province.
GOME Group is now China's largest electronics and appliance chain with more than 1200 stores in more than 200 cities.

He previously topped the Hurun Report's rankings of China's richest in 2004 and 2005.
Trading in Hong Kong-listed GOME was suspended in November 2008 after Huang was placed under investigation.

But it resumed in June last year after private equity firm Bain Capital invested at least 417 million US dollars in the form of convertible bonds and shareholdings in GOME in a bid to rescue its business and tarnished reputation.

A string of top business and government leaders have reportedly been implicated in Huang's case, including the sacked former mayor of the southern city of Shenzhen, Xu Zongheng.

Two top police officials, including a former deputy minister of public security, were also detained on suspicion of bribery in connection with the case, reports have said.

One of GOME's wholly owned subsidiaries, GOME Appliance, was charged earlier this year with bribery in connection with the charges against Huang.

GOME said it was "highly concerned" about the case and pledged to "actively defend against the accusation at the subsidiary".

But it said the damage to its operations would be limited, with the worst-case scenario being a fine.

Heh as I said in a previous post bribery is normal in China and the problem is you don't know it is illegal until the cops nab you.