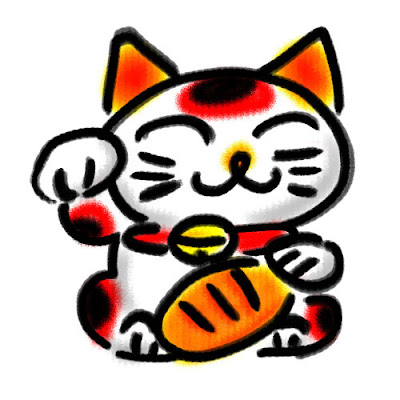 
I notice that in all Chinese owned businesses I see these sculptures of beckoning cats everywhere. I know they're supposed to bring good luck, but why? and why a cat?


These cats are called Maneki Neko.... in Cantonese we say Chew Choi Mao (fortune bringing cat sorta). The thing is they are not Chinese at all they are a Japanese invention and somehow crossed the straights of China and Japan to become popular in Chinese homes. It's a cat because in some folklore cats with their good vision are able to see in the dark. Thus they are able to see and scare away evil ghosts.

They are supposed to 'claw' good luck and protection towards you hence the beckoning paws, but really they are a product of Chinese polytheism.

Where they cherry pick bits and pieces of religions in an attempt to make sense of the crazy universe we live in. For example in the old Chinese woman's home down the road family members home they have a small altar which venerates their ancestors. A bowl of fruit and fake electric incense is placed to venerate your ancestors.

Move a little to the left and you see a massive fake plastic golden sycree which if was real gold I would need an extra large bank passbook to fit in all those 00s and I would retire walking into the sunset and never return...

Move nearer the TV and you have three statues Fuk Luk and Sau. They are displayed together, and their presence is said to ensure wealth, authority, respect, long life and good health. While if you go to the doorway you'll see Ba gau. A taoist symbol..... move a little back and you'll see a some shrunk mellons of some kind.

Thus people pick and choose, I know my dad did (my dad is an ancestor worshipping, Taoist, karma believer.