added by The Chinese guy
Yes you read what I wrote the Korean disease! The Korean might be pissed off at this but I think he may share some of my sentiment regarding this.

Myself and Simon in Seoul in 2009 used to sit on the green line of Seoul metro and be saucer eyed at the incredible amount of plastic surgery which has gone on in Seoul. This disease it appears um appears to be spreading into China. What the hell is wrong with normality? I mean hell much to their chagrin their children will have the same 'defects' too, not that they are defects

For instance has had more surgery than Michael Jackson

Infact she had so much surgery she was once refused entry into Hong Kong because they took off her face and ground down her jaw. Eww.

Now Angela baby is going through the same process

Granted TCG has had unplanned plastic surgery by totally unlicenced surgeons..... but in an unorthodox manner. I.e. TCG used to get into a lot of fights and the bastards would always aim for my nose. Cue me getting familiar with a doctor who would knock it back into place every few months. It's been broken so many times I can't breathe out of it as they couldn't repair the damage.

But for China to go all Korea is a bit hmm...


I think really this just shows an under belly of the total lack of confidence in Chinese women these days perhaps from advertising and photoshopping. TCG very nearly sold his soul to an advertising company.

On one hand this allows TCG to clean up and pick up easily in China, OTOH it is terrifically dissappointing to see all the low selfesteem issues in China. You should have seen it growing up in the UK, regular hand to hand combat and the fact that parents use the totally discredited constantly undermine the confidence of your children raising technique. 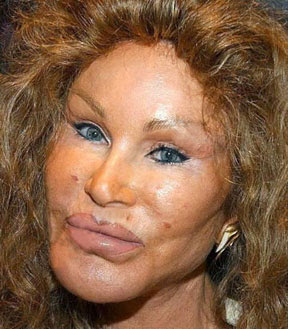 Most of all TCG doesn't want to be walking around China in 2020 with all the women looking like Ms Wilderstein here... Older Chinese women though do have a tendancy to tattoo their eyebrows once they get to a certain age though. But this had been going on for centuries.