added by The Chinese guy
Dear TCG
I have seen your motorbike trip and I want to do something similar. I want to walk the great wall of China.

[cut out lots of plans and stuff which is/was irrelevant)

Erm How long have you got? The damned thing is 5000km long this does not include trenches the rivers and lakes as well not to mention it is built along the spine of mountains though the length is not the problem (more later).

Actually let me tell you about the cyclists I met in Russia. Cyclists are a crazy bunch I met loads of them (and towed loads of them) across Russia as their bicycles are slow. So while I could cruise at 40-50mph effortlessly and manage a respectable 300-600 miles a day bicycles had to ride for 16-20 hours a day at 10-18kmh and even then they would almost all overstay their tourist visas as they would crack 160-200km a day and be exhausted.

Around Chelyabinsk most of them were utterly fucked due to the steep 1st gear (on a motorbike ) hills.

On foot you'll manage what 30km a day and it'll take you 170+ days. And that is being HIGHLY optimistic as the Great wall is not what you see in pictures. on a million postcards and Internet pictures. The pictures you see on postcards and online are the bits you see near Beijing. These are not authentic they are rebuilt sections much like everything else in China (in China if you go to a temple there is a very high chance it is not authentic as most temples were rebuilt in the 1980s after being ransacked in 1970s Cultural revolution)

You go a 100km west and the walls are crumbling and falling apart. Much like the Roman Coliseum people over time saw it as a source of building materials and took bricks away from it because they could. 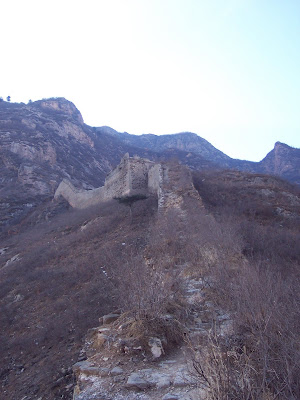 I'm not saying don't do it or it'll be dangerous. Simply that it isn't as simple as I can walk X miles a day the wall is Y miles long therefore I can walk it all in Z number of days. Hell if you do that all you'll be doing is walking all day anyway and what's the point of doing that? Added to the fact that once you get past Hohot it becomes really dry and civilisation begins to fizzle out markedly. Which means you have to travel away from it and back for food and supplies which will increase the amount of time needed to travel.

Have you considered this alternative?

Cycling alongside the wall? You can cycle in its shadow for much of its length passing through fairly decent roads and villages where you can get food and help daily. You will be able to keep up a higher speed and if you are reasonably fit manage it in about 75-90 days (the longest visa you can easily get for China). Maybe as well as the bicycle carrying stuff you'll need like food water etc.

I'm not saying don't do it. By all means go and have a try at it. I'm not saying it'll be dangerous as simply I doesn't know TCG ain't like the Korean the Korean knows all about Korea as Korea is a tiny country. China is massive.

However something to inspire you or scare you off even.