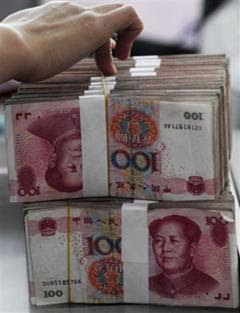 This is like an earth quake! China has been fucking over the US economy by keeping a low peg to the US$, and it looks like they are starting to relent at last In 2008 the Chinese actually let the currency appreciate by 21% two years ago? It has since only moved 5% in the past two years. It looks like the CCP isn't going to let Obama sink down yet (and potentially drag them down with them) of course thats if they aren't bull shitting the world markets of course. Korea de-pegged in the 1990s and their economy overheated and exploded leading to the IMF bail out. Will the CCP manage to do it properly? This sort of changes the game that RMB used to be proxy US$...

The Yahoo article is below.

SHANGHAI (AP) -- China says plans to allow greater flexibility in its currency are in line with its own interests but will do little to rebalance world growth without a fundamental overhaul of global financial systems.

The announcement Saturday by China's central bank that it is giving up a two-year-old peg of its currency to the U.S. dollar won praise overseas, coming just a week ahead of a G-20 summit where the issue was bound to be discussed.

But Beijing remains insistent that its currency policies are not the main problem.

The summit must focus on more urgent global reforms, said a commentary Monday by the official Xinhua News Agency.

"If they cannot make good use of the coming G20 summit to press ahead with the much-needed overhaul of the global financial system, the international community will soon find to its disappointment that its leaders look only for red herrings, rather than real solutions, at a time when true leadership is badly needed," it said.

The central bank left the yuan's parity rate against the U.S. dollar unchanged Monday at 6.8275, the official Xinhua News Agency said. The rate is a weighted average of prices given by market makers, excluding highest and lowest offers.

But the yuan did gain in spot trading, strengthening to 6.8030 to the dollar by midafternoon Monday, up from 6.8272 on Friday.

Regional markets nonetheless responded enthusiastically to Beijing's announcement, with shares climbing in most major markets as investors relieved of uncertainty bought airlines and other heavyweight shares.

"The markets were boosted because investors are becoming less risk averse than before. They are more aggressive," said Ben Kwong Man Bun, chief strategist for KGI Securities in Hong Kong.

A stronger yuan would make Chinese exports more expensive and bring relief to foreign manufacturers that have struggled to compete. But Beijing insists currency stability is fundamental to economic growth and denies other nations' accusations the yuan is unfairly undervalued.

Some slammed the central bank's announcement as a capitulation to foreign pressure, despite Beijing's insistence it would do nothing of the sort.

But the central bank said the move was "in line with China's long-term fundamental interests, as it promotes the economic structural adjustments that will lead to sustainable growth."

China is intent on steering a path to economic recovery. With workers at home demanding wage hikes -- which would also increase the price of exports -- the central bank has sought to curb speculation of a major rise in the value of the yuan, also called the renminbi.

China says the exchange rate is roughly where it ought to be, and economists said they don't anticipate big swings in the yuan's value.

"The official announcement should be interpreted first and foremost as an important signal towards a more flexible exchange rate, rather than a significant revaluation of the CNY," UBS economist Wang Tao said in a report on the change.

Given the 0.5 percent daily trading range for the yuan, which remains unaltered, she forecast only modest changes.

The central bank said China will rely more on a basket of currencies that includes the U.S. dollar to determine the exchange rate, rather than the dollar alone.

China allowed the yuan to rise by about 20 percent beginning in 2005, but halted that two years ago to help Chinese manufacturers weather the global financial crisis.

Since then, the yuan's value has been pegged to the dollar at an exchange rate of roughly 6.83 to $1. The government sets the rate each day before the start of trading and retains powerful tools to control its movement.

Any sudden rise in the yuan could ruin businesses already operating on razor-thin margins and cost jobs. It could also drive down the value of China's $2.4 trillion in foreign exchange reserves.

Because of China's large trade surpluses, the central bank intervenes heavily in the exchange market, buying up excess foreign exchange earnings to keep the yuan's value from rising.

But with China's economy growing at double-digit rates, boosted by 4 trillion yuan ($586 billion) in stimulus spending and record bank lending to finance construction projects, Beijing can afford to move faster, some say.

"Just a day after there was much hoopla about the Chinese finally changing their policy, they are already backing off," U.S. Sen. Charles Schumer, a New York Democrat, said Sunday, adding he plans to move forward with a bill that would punish Beijing for its currency policies.

"It is only strong legislation that will get the Chinese to change and will stop jobs and wealth from flowing out of America as a result of unfair trade policies," he said in a statement.

Some Chinese experts criticized Saturday's announcement as a cave-in to foreign pressure that could damage China's crucial export sector, even if it was necessary for diplomatic purposes.

"From an economic angle, the appreciation of the renminbi will have a definite effect on exports, but in terms of politics and macroeconomic policy, it can be seen as a result of the need for balance," said Zhao Xijun, deputy dean of the School of Finance of Renmin University.